'Nothing replaces winning': Big 12 back from the brink 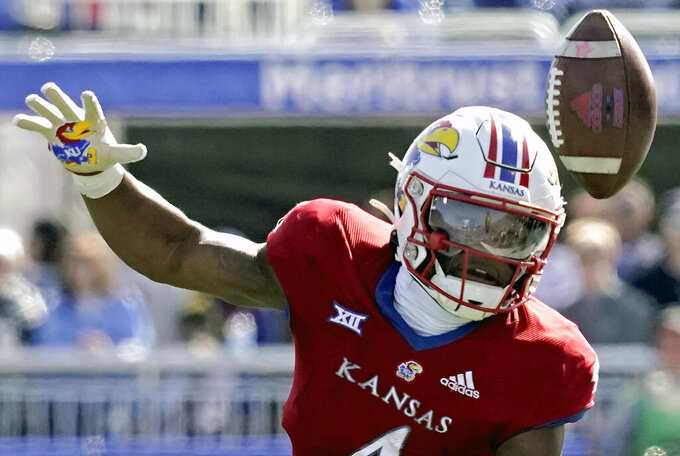 FILE - Kansas running back Devin Neal can't control a pass during the second half of an NCAA college football game against TCU Saturday, Oct. 8, 2022, in Lawrence, Kan. This weekend's matchup of undefeated Big 12 teams has No. 8 Oklahoma State at No. 13 TCU. That follows last weekend's thrilling TCU-Kansas game, which Big 12 Commissioner Brett Yormark is quick to point was the site of the most-watched episode of ESPN's “College GameDay” of this season. (AP Photo/Charlie Riedel, File)

NEW YORK (AP) — Big 12 Commissioner Brett Yormark spent part of this week in Manhattan, at ESPN's South Street Seaport studios and also hunkered down in the midtown offices of one of the top public relations firms in the country, trying to “set the narrative” for a conference that has come back from the brink.

Two and half months into his tenure, Yormark is grinding to deliver on his top priorities: Creating new revenue streams and making the Big 12's brand more relevant to both high school recruits and potential business partners.

“One of the reasons I’m here is because I think we can become more commercially viable than we have been,” said Yormark, a former executive at talent agency Roc Nation and CEO of Barclays Center in Brooklyn.

Of course, nothing helps more than success on the field and the new commissioner is getting a lot of help from the Big 12's football teams right now.

Half of the conference's 10 schools are in the AP Top 25 this week, and the four highest ranked teams are all Big 12 members for the foreseeable future. No. 22 Texas and Oklahoma, currently on a three-game losing streak, have been overshadowed as they prepare to head out the door to the Southeastern Conference after next season.

This weekend's matchup of undefeated Big 12 teams has No. 8 Oklahoma State at No. 13 TCU.

That follows last weekend's thrilling TCU-Kansas game, which was the site of the most-watched episode of ESPN's “College GameDay” this season.

For the first time since 2007, both Kansas schools are ranked. The 19th-ranked Jayhawks' remarkable rise out off decade-long doldrums under coach Lance Leipold has been one of the top stories of the season.

“We all think we’re great marketers, and we all do what we do better than the next person, but at the end of the day nothing replaces winning,” Yormark said.

A little more than a year ago the Big 12 seemed to be in danger, yet again, of being wiped out of major college sports. Since it's creation in 1996 in an awkward and incomplete merger of the Big Eight and dying Southwest Conference, the Big 12's brand has largely been instability and dysfunction.

And then Texas and Oklahoma decided to leave, too, news that staggered the Big 12 in July 2021.

“Well, there was a lot of uncertainty,” Texas Tech athletic director Kirby Hocutt said, trying to be measured about what could have been a devastating blow.

The Big 12's flagship schools, the only ones to win national titles in the league's short history, will join the SEC by 2025.

Next year, BYU, Central Florida, Cincinnati and Houston will join the Big 12. They bring recent success in football and men's basketball. They will expand the Big 12's geographic footprint and grow its customer base with huge student bodies.

“I think we’re very galvanized and I think maybe what happened last year galvanized the eight of us remaining even more so,” Kansas State athletic director Gene Taylor said.

And there is a chance the Big 12 could keep growing. The pending departures of Southern California and UCLA for the Big Ten have destabilized the Pac-12.

While it seems as if the Big Ten is done — for now — building a West Coast wing, the Big 12 has tried to present itself as a viable option for Pac-12 schools that might find more long-term certainty appealing.

While the Big Ten and SEC use massive media rights deals to separate from their Power Five peers, the race is really to be No. 3, though Yormark is not about to concede that.

The Big 12 now appears positioned to be more stable than the Pac-1 2 and more dynamic and interesting on the football field than the Atlantic Coast Conference, which is locked into a media rights deal with ESPN through 2036.

The Big 12 is banking on top-to-bottom competitiveness to make up for a lack of marquee national brands in football. Its leaders believe the conference can become as deep with quality football teams as it has been in men's basketball

“We sell it a lot because people want to play in the best (conference), and every coach believes there conference is the best,” Baylor men’s basketball coach Scott Drew said. "But statistically, analytically, there can only be one No. 1. And in the last nine years the Big 12, six of those nine years has been the top-ranked conference RPI-wise or analytically."

Depth is great. National championships are better and Kansas, one of the bluest bloods in college basketball, and Baylor have won the last two NCAA men's tournaments. Texas Tech played for a title in 2019. There has been a Big 12 team in the men’s Final Four every year since 2018 and in 2021, incoming Big 12 member Houston made it, too.

College basketball is more conducive to a bigger pool of title contenders and upward mobility into its elite tier than football. The future Big 12 will have two schools that have won football national titles: TCU in 1938 and BYU in 1984.

Hence, Yormark's brand build. The Big 12 can't match the century-old prestige of the Big Ten or the packed trophy case of the SEC, but maybe it can close the gap by being the coolest conference.

Feel free to be skeptical, but there is peace in the Big 12 for the first time in a long time and hope that along with it will come prosperity.