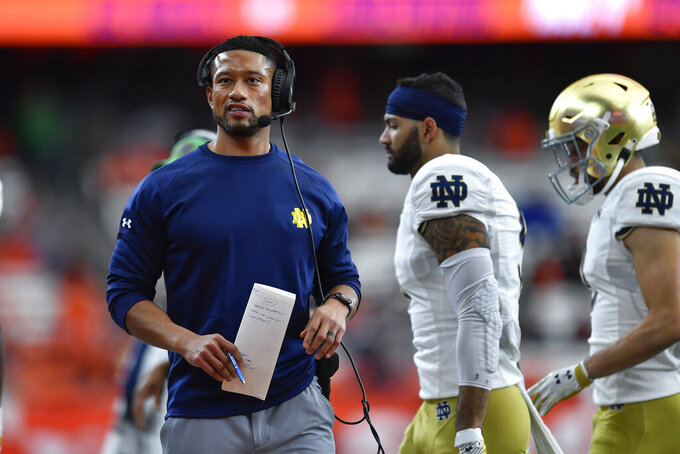 SYRACUSE, N.Y. (AP) — All it took was one play for the Irish to know it might be their lucky day.

Brandon Joseph returned an interception 29 yards for a touchdown on the first play of the game, tailback Audric Estimé rushed for 123 yards and scored twice in the fourth quarter to thwart a Syracuse rally, and Notre Dame defeated the No. 16 Orange 41-24 on Saturday.

“It was huge. To start the game on defense and the very first play to get a pick-six, that’s how you want to start if you can,” Notre Dame first-year coach Marcus Freeman said. “It was a huge momentum builder for everybody.”

And the momentum lasted, even after Syracuse marched right down the field and scored to tie it.

Notre Dame (5-3) has won five of six since opening the season with losses at Ohio State and at home to Marshall. The Irish have won 26 consecutive regular-season games against ACC opponents, and they’ve played some of their best football on the road, including a 45-32 win at No. 21 North Carolina.

Syracuse (6-2) suffered its first loss of the season last week at Clemson, blowing an 11-point halftime lead and falling 27-21. Star tailback Sean Tucker only had five carries in that game and coach Dino Babers vowed that would not happen again. It didn’t.

Tucker finished with 60 yards on 16 carries and scored on a 4-yard run in the final minute of the third quarter to pull Syracuse within 24-17. But the Orange were operating without starting quarterback Garrett Shrader, who was kept out of the game in the second half because of an undisclosed injury.

Shrader, a dangerous dual threat and the key to the offense, rushed only twice for 2 yards and completed 5 of 14 passes for just 35 yards and a 13-yard touchdown pass to Oronde Gadsden II.

"I’m really disappointed about the loss but still feel good about this football team," Babers said. "We’re 6-2, the two opponents that we just played were extremely, extremely physical. Obviously, some of that stuff has taken a toll. I told the team to stay together which we will do.”

Backup quarterback Carlos Del Rio-Wilson sparked the Orange, including a 23-yard pass to Damien Alford to set up Tucker's score and added a 13-yard TD pass to D'Marcus Adams late in the fourth. But a tipped pass was intercepted by Notre Dame's Marist Liufau less than 2 minutes into the final quarter and Estimé scored on an 11-yard run, then added a 2-yard touchdown run midway through the period.

“That was the moment for me when I thought ‘We got it,’ ” Freeman said of the interception. “It was good to see this team battle.”

Syracuse entered the game leading the ACC in total defense, but its run defense was exposed by Clemson. The Tigers rushed for 293 yards on 60 tries and the Irish were intent on doing the same, relying on their huge offensive line and the punishing runs of Estimé and Logan Diggs, who had 20 carries apiece. They took turns during a 55-yard scoring drive, all but two of the plays on the ground with Diggs scoring on a 3-yard run midway through the second quarter to give the Irish a 14-7 lead.

“We’re just going to run after you. You’re going to have to stop us,”Estimé said. “If you’re not stopping us, we’re going to keep on doing it until the game’s over. Just showed our identity today.”

Irish quarterback Drew Pyne, who was rarely pressured, threw to tight end Michael Mayer for 37 yards and again for 11 more before Jayden Thomas's TD catch gave the Irish a 21-7 lead with 17 seconds left in the opening half.

Mayer entered the game needing 25 yards to become the Irish's all-time leader in receiving yards for the position — and it did. He finished with three catches for 54 yards and has 1,870 to best Tyler Eifert's record of 1,840 yards set from 2009-12.

Mayer has caught at least one pass in 32 straight games and needs one touchdown catch to break a tie with Ken MacAfee 1974-77 for most in a career — both have 15.

Syracuse attracted its second straight sellout crowd, which had an early effect in the indoors stadium. The Irish were called for two false starts and Blake Grupe missed a 39-yard field goal late in the first quarter.

Syracuse fell only two spots after the loss at Clemson, but this loss will drop the Orange a lot.

Notre Dame: The Irish have rebounded nicely after their awful start and now have defeated two ranked teams on the road. They'll get their biggest test of the season next week when they host No. 5 Clemson next Saturday.

Syracuse: Shrader was one of the main keys to the team's success, and he's the acknowledged leader. Del Rio-Wilson showed he could step in and be effective.

Syracuse is at Pittsburgh next Saturday.