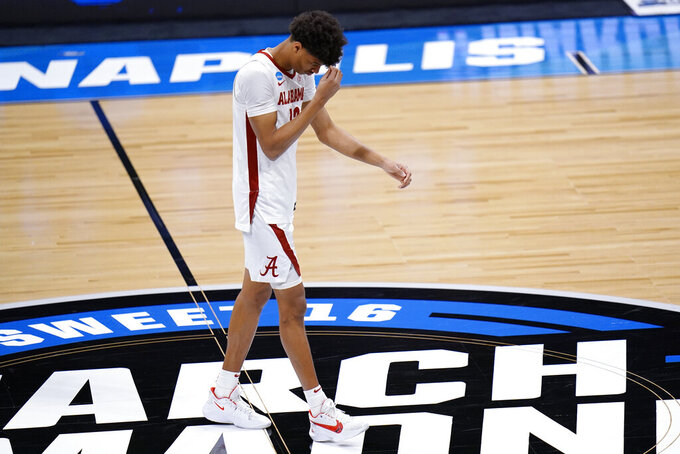 Alabama forward Darius Miles (12) walks off the court after losing to UCLA 88-86 in overtime in a Sweet 16 game in the NCAA men's college basketball tournament at Hinkle Fieldhouse in Indianapolis, Sunday, March 28, 2021. (AP Photo/AJ Mast)

All those missed free throws, an inability to play at its preferred pace and a UCLA team maximizing its potential combined to end second-seeded Alabama's season.

“I told our guys I’m going to talk about this team for the next 30 years I’m coaching,” Oats said. “This is an unbelievable team with a bunch of high-character kids that stepped up to the challenge and changed the entire narrative of Alabama basketball.”

Long overshadowed by the nation's preeminent college football program, Tide basketball has been an afterthought in the state most years. This wasn't one of those years, even after Nick Saban's bunch won another national title in January.

Alabama finished 26-7, tied for most wins in program history, and swept the Southeastern Conference regular-season and tournament titles for the first time since 1987. The Tide were in the Top 10 eight straight weeks.

The loss to UCLA ended an eight-game win streak and came down to missed free throws.

Alabama was a middling free-throw shooting team for the season, making 72%. But the Tide hit just 11 of 25 against the Bruins, and the biggest misses happened with 6 seconds left in regulation. Herbert Jones went 0 for 2 from the line with Alabama down one point.

According to ESPN, it was the worst performance by a team to attempt at least 25 free throws in the NCAA Tournament since Kansas was 12 for 30 against Syracuse in the 2003 championship game won by the Orange.

“To me, free throws are always a mental thing,” Oats said. "It’s the same distance. There are zero variables on free throws other than the pressure you put on yourself mentally. I always tell the guys to turn yourself into a robot at the free-throw line. It’s the same routine every time.

“It’s disappointing. If we make them, we win the game. It hurts to lose a game knowing if you make free throws, you win. We both shot 25 free throws. They made 20, we made 11. We needed one more free throw in regulation to win it.”

The Tide also were knocked out of sync early. Jones, the SEC player of the year and defensive player of the year, was called for two offensive fouls in the first minute, and Oats said that changed the way he played. UCLA also did a good job slowing the tempo of the team that was 11th-fastest in pace of play, according to KenPom.com.

“We’re a better team than this,” Oats said. “You've got to be great every night in March. It’s a one-game elimination tournament and the best team doesn’t always win. The team that plays best that night wins, but it’s not always the best team.”

In a game with eight lead changes and 11 ties, Alabama forced overtime on Alex Reese's 3-pointer with less than a second left in regulation.

“We had all the momentum going to overtime,” Oats said. “They could have folded. They didn't. They kind of punched us in the mouth to start overtime.”