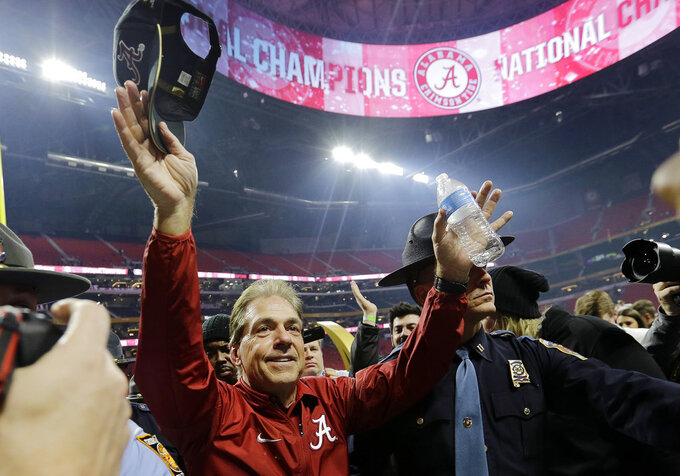 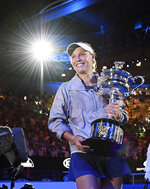 No more timeouts, see off the year,

Offer a toast and close the show

With champagne flutes or cans of beer —

Who wrote this law? By whose decree

Bama turns from Hurts to Tua,

Of glory on a balance beam

And how dreams turn to anguish, strife —

Larry Nassar is jailed for life.

Soon heads are served upon a plate:

With Wozniacki breaking through.

What's up with Brady's injured hand?

Pats pushed aside by Eagles, Foles.

(Now talk about an idle threat.)

In Pyeongchang, a point of pride —

The North and South walk side by side.

Once again, we all love curling.

And Notre Dame, the women's crown —

Baseball starts behind in the count,

With rain and cold as strikeouts mount.

How to adjust the thermostat?

Howls for Woods, a Masters racket

But Patrick Reed wears the jacket.

For Baffert, one more mighty steed.

Sports gamblers pull an inside straight.

At last Will Power, Indy guy.

The desert sky, the neon lights,

Hockey skates to the Golden Knights.

But magic ends when time is up —

Treat the union as servile fools.

But Steph, Durant are too much weight —

It's Justify ! Imagine that:

Serena's catsuit, all the rage.

In Paris, though, it's Rafa's stage.

Mickelson freaks and vents his spleen,

Smacking a moving ball on green.

Brooks Koepka? He rewinds the clock,

James leaves the home he loves the most

For purple and gold on the coast.

The World Cup's on at Putin Place,

One more prize for his trophy case.

Novak Djokovic — look who's back?

Kawhi Leonard and Spurs are through,

Maestro with a Stradivari.

Things get hot, his pants on fire.

Woods makes a run at PGA.

This Koepka guy won't go away.

Tears and chaos and disbelief.

And after all is said and done:

The golf year ends and this appears:

A win by Woods — it's been five years.

His Ryder Cup? Bumps and bruises,

NFL rules are one fine mess —

Chiefs are soaring behind Mahomes,

Gymnastics caught in one more bind.

Its leaders come from God knows where

And quickly vanish in thin air.

Trips to the mound, calls to the pen.

A long night's journey into day.

Yes, we're far from the beginning.

How good's Boston? Let's be precise:

Simply put, as good as it gets.

Coach cleared but next day out the door.

Durant and Green do not play nice,

And trouble looms in paradise.

A deal that leaves a nasty smell.

With NASCAR stalled on exit ramp.

TV stunt in the desert sun.

A heavyweight feast, fierce and raw,

Wilder, Fury fight to a draw.

Tua's injured, Hurts gets the call.

He'll coach the Rose Bowl then that's it.

The year's then done. How does it feel?

There's no extension to this deal.

But just down the road, sight unseen,