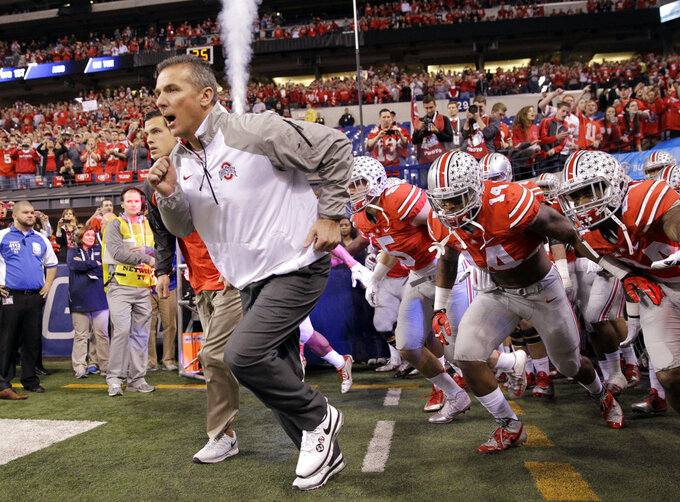 FILE - In this Dec. 6, 2014 file photo, Ohio State head coach Urban Meyer runs onto the field with his team at the start of the Big Ten Conference championship NCAA college football game against Wisconsin, in Indianapolis. Ohio State says Urban Meyer will retire after the Rose Bowl and assistant Ryan Day will be the next head coach. After seven years and a national championship at Ohio State, the 54-year-old Meyer will formally announce his departure Tuesday, Dec. 4, 2018, at a news conference. (AP Photo/Darron Cummings, File)

Ohio State coach Urban Meyer is stepping down after the Buckeyes play Washington in the Rose Bowl on Jan. 1. A look at his career:

TITLES: 3 national championships (two at Florida, one at Ohio State). One of only three coaches to win national titles at two schools.

BIO: Native of Ashtabula, Ohio. Played two years of minor league baseball in the Atlanta Braves system before graduating from the University of Cincinnati. Started career as an intern at St. Xavier High School in Cincinnati in 1986. The following year joined coach Earle Bruce's staff at Ohio State and spent two years as a graduate assistant while pursuing a master's degree in sports administration. Worked as an assistant at Illinois State, Colorado State and Notre Dame before taking head coaching job at Bowling Green.

THE SKINNY: Meyer goes out on top. He is a member of the upper echelon in the college coaching ranks, a peer of Alabama coach Nick Saban. But an arachnoid cyst in his brain that causes severe headaches worsened over the course of the season. He stepped down twice at Florida because of stress-related health concerns. He also was stung by a three-game suspension for mishandling domestic-abuse allegations against now-fired assistant Zach Smith.