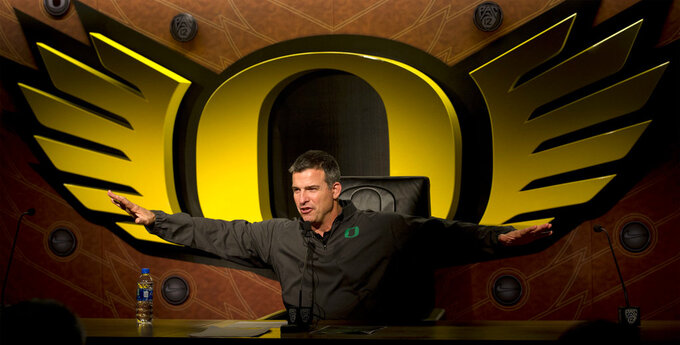 University of Oregon football head coach Mario Cristobal smiles as he talks about the Ducks fifth-ranked recruiting class during a press conference at the Hatfield-Dowling Complex Wednesday, Dec. 19, 2018 in Eugene, Ore. (Andy Nelson/The Register-Guard via AP)

Zach Harrison is one of the most highly touted recruits in the country, and he goes to high school 15 miles from Ohio State.

Yet not until Wednesday, the first day of the early signing period, did the 6-foot-6, 245-pound defensive end commit to the Buckeyes, giving incoming coach Ryan Day his first victory as Urban Meyer's replacement.

Harrison's choice, streamed out over Olentangy Orange High School's website, was maybe the most intriguing development of what can now be considered the new signing day. This is year two of the early signing period in college football and just like last year, most of the scholarships have been scooped up. The traditional signing period in early February will mostly be for finishing touches.

Alabama has already signed most of a class that was already considered the best in the country and added a couple more five stars on top of that. Ahead of the Crimson Tide's latest College Football Playoff appearance and national championship pursuit, Saban has already locked up another recruiting title.

The Southeastern Conference is primed to have the four highest-rated recruiting classes after the early period ends Friday. According to 247 Sports' composite rankings of major recruiting websites, Alabama is No. 1, followed by Georgia, Texas A&M and LSU.

Oregon rounded out the top five, the one interloper amid the usual suspects in a top 10 that included Clemson, Oklahoma and Michigan.

Ohio State has mostly lived in the top five during Meyer's remarkable seven-year run as Buckeyes coach. But with a small class (the Buckeyes signed 15 and don't have room for much more), and some uncertainty about Meyer's future throughout the season, the Buckeyes trailed both Michigan and Penn State in the Big Ten in the recruiting rankings much of the fall.

Meyer was suspended for the first three games of this season after the university commissioned an investigation into his handling of now-fired former assistant Zach Smith, who was accused of domestic violence by his ex-wife. After Meyer's return, there were questions about his future at Ohio State and health. He has a brain cyst that causes severe headaches.

Meyer announced his retirement earlier this month. Day will take over after the No. 5 Buckeyes play No. 9 Washington in the Rose Bowl on Jan. 1.

The 39-year-old Day is a first-time college head coach after spending two seasons as offensive coordinator for Meyer. Meyer is 82-9 at Ohio State and if Day is going to even come close to keeping up that level of success, it starts on the recruiting trail.

Harrison is a five-star recruit who was also considering Michigan and Penn State. He had kept his recruitment relatively quiet. Not until he unzipped his jacket to reveal an Ohio State T-shirt did the suspense end.

"It's been a long process," Day said. "His head coach had a lot to do with this. (Ohio State defensive line coach) Larry Johnson has been recruiting Zach Harrison for a long time. Urban was a part of it."

But just like those three games the Buckeyes won while Meyer was suspended, this win goes on Day's ledger.

Ohio State lost the quarterback it had lined up for this class when Dwan Mathis of Michigan flipped to Georgia. The late change immediately sparked speculation that Mathis' decision was related to the likely transfer of Justin Fields, who was a five-star recruit in 2018.

Fields has notified Georgia of his intent to transfer and Ohio State is a rumored possibility. NCAA rules would require Fields to sit out next season, but he could apply for a hardship waiver that would give him immediate eligibility.

The Buckeyes likely will be looking for a new starter in 2019, with Dwayne Haskins expected to declare for the NFL draft after the Rose Bowl. Ohio State has Tate Martell, who was Haskins' backup this season, and Matthew Baldwin on the roster. Adding Fields could change plans.

Even during the halcyon days of Chip Kelly and Marcus Mariota at Oregon, the Ducks never had a top-10 recruiting class.

Second-year coach Mario Cristobal, a former Alabama assistant and Miami player, is changing that by cleaning up in California. Oregon's class is the best in the Pac-12 and half of the 22 players they signed are from California. More important than the quantity was the quality.

Oregon landed the top-ranked player in the state in Kayvon Thibodeaux, a defensive end from Southern California, along with six other four-star recruits from the Golden State.