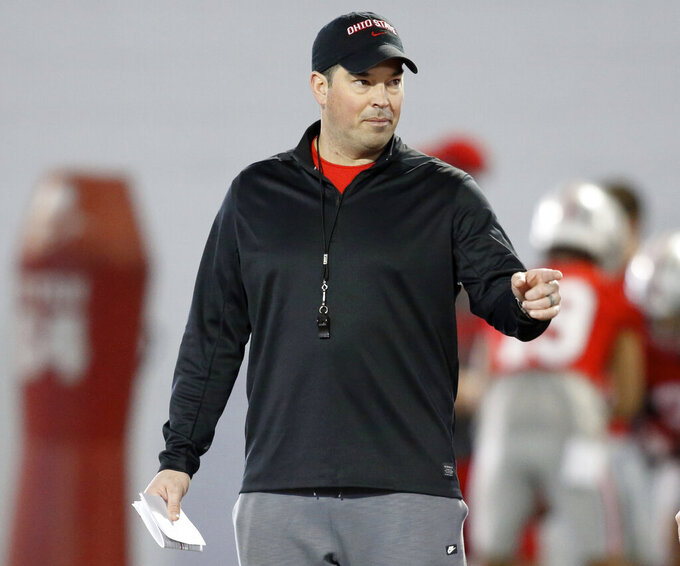 FILE - In this March 6, 2019, file photo, Ohio State University football coach Ryan Day gestures during an NCAA college football practice in Columbus, Ohio. Ohio State on Friday, March 19, 2021, opened what Day hopes will be an uninterrupted spring practice as he seeks a new starting quarterback and some normalcy after a tumultuous 2020. (AP Photo/Paul Vernon, File)

COLUMBUS, Ohio (AP) — Ohio State on Friday opened what coach Ryan Day hopes will be an uninterrupted spring practice as he seeks a new starting quarterback and some normalcy after a tumultuous 2020.

Spring workouts were cut short last March when the coronavirus spread across the country. The Buckeyes practiced three times before spring break and didn’t return to the field as a group until the fall ahead of a delayed and abbreviated season that saw them eventually lose to Alabama in the national championship game.

Although Ohio State's football activities were paused last week because of an uptick in positive tests, the first of 15 workouts began on schedule Friday and will culminate in the annual spring game on April 17, which may or may not have fans involved. The event in normal years typically draws a big crowd — nearly 100,000 in 2015 — but it’s also critical for coaches in evaluating young players under game-like conditions.

The overarching question this spring is who will be starting at quarterback when the Buckeyes open the season Sept. 2 at Minnesota. The early departure of Justin Fields for the NFL left two untested backups — pro-style quarterbacks C.J. Stroud and Jack Miller III, two of the top prep signal-callers in the country that Ohio State snagged in the 2020 recruiting class. Five-star 2021 recruit Kyle McCord, similar in size and skills to the others, was an early enrollee and also will compete for the job.

“We're going to try to get as equal amount of reps as we can,” Day said. “We're going to rotate guys the best we can. We've been through this before. We've had several guys in there, and I think we do as good a job as anybody making sure guys get equal reps and compete.”

All three are starting at basically the same place. Because the 2020 season was shortened and there wasn’t much mop-up duty to be had, neither Stroud nor Miller got much playing time. Day didn’t even get a good look at them because 2020’s spring practice lasted only a week before it was abandoned due to the pandemic.

With Fields as the clear starter in Day's first two years as Ohio State head coach, this will be the first quarterback derby over which he has presided, although he was an offensive assistant when future first-round draft NFL draft picks Dwayne Haskins Jr. and Joe Burrow were battling it out in the spring of 2018.

“We'll know when the time is right (to name a starter), you know, like we have in the past here,” he said. “But they have a lot of learning to do. They haven't had a lot of snaps. And to be fair, they need to kind of spend some time in this offense learning, and then as we start to get them into game situations through the spring and through preseason, we'll have a better idea.”

First-team All Big Ten offensive tackle Thayer Munford, who is returning for an extra year of eligibility, is comfortable with the candidates.

“What stood out for me is that they love to work,” said Munford, who will anchor an offensive line with three new starters. “I see them out after every workout just throwing balls to wide receivers. They want to compete for the spot. When we see that as offensive linemen we are more comfortable blocking. They make everybody else feel better, because what are we without the quarterback?”

NOTES: Safety Marcus Hooker has been suspended indefinitely after being arrested for drunken driving. He was suspended by the program previously after he was charged with drunken driving in 2018. ... Day said the program is developing plans for vaccinating players since the state opens eligibility for all ages starting March 29.