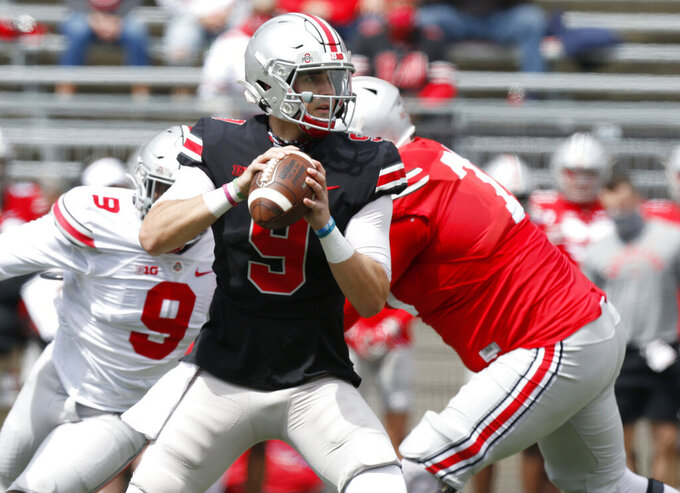 COLUMBUS, Ohio (AP) — With spring practice in the books, Ohio State's quarterback derby will carry over into fall workouts.

That's not a surprise, considering the candidates to succeed star Justin Fields are two second-year players and a true freshman. Neither has thrown a pass in a college game.

C.J. Stroud, Jack Miller III and early-enrollee Kyle McCord all got plenty of action in Saturday's annual spring game, none gaining a clear edge. Stroud and McCord each threw two touchdown passes in the controlled scrimmage.

"This was very similar to what this whole spring has been,” coach Ryan Day said. “Some good, some not so good and a lot of learning opportunities there. There are flashes here and there, and then there are just some learning opportunities. The race is on over the next few months to see who can make the next stride.”

None of the quarterbacks was made available after the game, but teammates liked what they saw. Fifth-year offensive tackle Thayer Munford is confident any of the three can lead the Buckeyes when they open the season Sept. 2 at Minnesota.

“Whoever it will be behind me and the offensive line when we play Minnesota, everybody knows he’ll be the guy,” Munford said. “I’m just happy with where our quarterbacks are right now.”

Day returns for his third year as the Ohio State head coach. He has 12 starters returning from the 2020 team that finished 7-1 in a season shortened by COVID-19. The Buckeyes won a fourth straight Big Ten championship and advanced to the national championship game, where they were routed by Alabama.

“The No. 1 goal was to come out (spring) healthy and we did that,” Day said. “We had a really physical spring. It was great to get out there and get in the stadium and play."

The game was played before a limited crowd of about 19,000 fans, which was progress after the Buckeyes played home games in a nearly empty Ohio Stadium all of last season.

The Big Ten Network reports that 2021 will be the first season since 1952 that the Buckeyes will start a quarterback who hasn't thrown a college pass. That was the second year of legendary coach Woody Hayes' 28-season run in Columbus. The Buckeyes finished 6-3 then.

Ohio State went through spring drills without several injured players expected to start in the fall. They included guard Harry Miller, defensive tackle Haskell Garrett, middle linebacker Dallas Gant and cornerbacks Sevyn Banks and Cameron Brown. All are expected to be ready for the start of preseason camp in August.