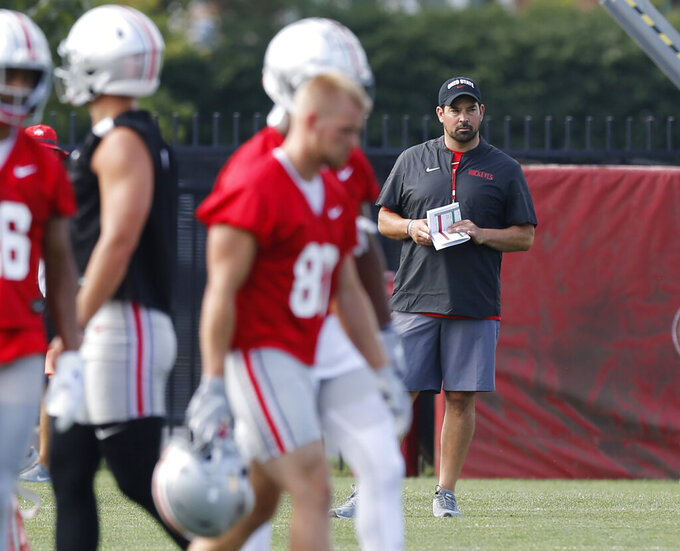 The 40-year-old Day opened his first training camp as Ohio State coach on Friday, the hand-picked successor to Urban Meyer, who led the Buckeyes to a national championship in 2014. Day worked for Meyer as an assistant and has NFL experience, but he's never been a full-time head coach at any level. He had a three-game stint as interim coach last year when Meyer was suspended for his handling of domestic violence allegations against a former assistant.

"It's exciting," Day said Friday. "It's part of a new journey. We all have something to prove."

The Buckeyes open Aug. 31 at home against Florida Atlantic.

Day was named coach in January after Meyer decided to step aside because of health issues. Meyer, who has the title of assistant athletic director at Ohio State, has jumped back into TV as an analyst on Fox's pregame show, and announced plans to lend his name to a restaurant in suburban Columbus.

Day is the next guy on the hot seat. Ohio State also has five new assistant coaches, including defensive coordinator Greg Mattison, a former assistant at rival Michigan. And the expectations in Columbus are the same as ever: Don't lose, especially not to the Wolverines.

The Buckeyes likely will start a dual-threat quarterback, Justin Fields, whose transfer from Georgia prompted Tate Martell, the heir apparent to the starting job, to leave for Miami.

Just one of the five offensive linemen in front of Fields is a returning starter, but there will be lots of experience all around him. J.K. Dobbins will be the No. 1 running back and is poised for a huge season now that he's not splitting time with Mike Weber, who left for the NFL. Dobbins will be invaluable early if Fields requires some time to get comfortable.

And there is a ridiculous amount of experience and talent among the wide receivers, including seniors K.J. Hill, Austin Mack and Binjimen Victor, along with Chris Olave, who emerged as a star in the making at the end of last season.

Mack said the stable of experienced receivers will help bring Fields and his likely backup, graduate transfer Gunnar Hoak, up to speed.

"We have to get them comfortable being in that huddle and being able to talk to us," said Mack, who is healthy after missing the last few games of the 2018 season with a foot injury. "That's up to us. It's all of us just helping those quarterbacks get acclimated as fast as possible."

The defense is looking to rebound after being prone to high-profile lapses last year, including in an upset by unranked Purdue that ended up pushing the Buckeyes outside the playoff picture.

The unit returns a scary front line. The one to watch is Chase Young, a sack specialist who almost certainly will be in an NFL training camp this time next year.

"He's got a happy-go-lucky personality, but I see a little more seriousness in him now," Day said of the junior defensive end. "This is his time to really step up and be a leader."

Ohio State's weakest position group last season was linebacker. Tuf Borland, a team captain, has the most experience at middle linebacker, but he will be pushed by Baron Browning and Tejada Mitchell. Starters Malik Harrison and Pete Werner also return.

"We definitely do have stuff to prove," Harrison said Friday. "There was a lot of talk and a lot of things going down that was on us. We're coming every day ready to work so we don't have that same problem this season."