Ohio State's Young leads with his mouth, then backs it up 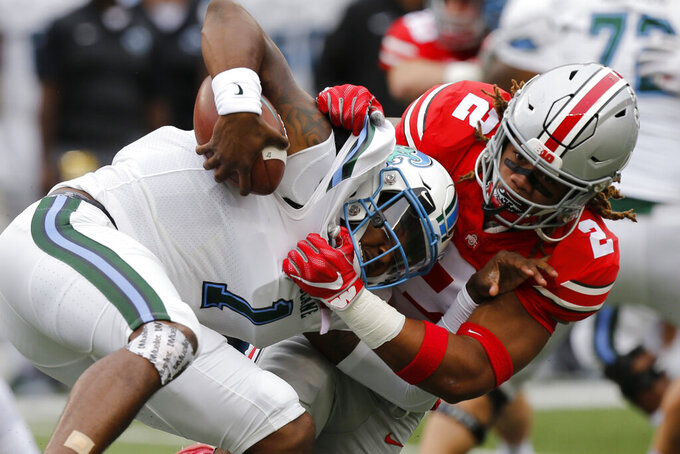 FILE - In this Sept. 22, 2018, file photo, Ohio State defensive end Chase Young, right, sacks Tulane quarterback Jonathan Banks during the first half of an NCAA college football game, in Columbus, Ohio. Chase Young is known to lead with his mouth. Being the loudest Buckeye on the field is part of the reason his teammates elected him a captain this season. The other part is that he can back it up the chattering. Young is Ohio State’s best player, a 6-foot-5, 265-pound man with startling quickness and a mean streak who rarely stops cheering, cajoling and trash-talking. (AP Photo/Jay LaPrete, File)

COLUMBUS, Ohio (AP) — Chase Young is one chatty Buckeye, and he has the game to back up the big talk.

Young is No. 5 Ohio State 's best player and was named to the preseason Associated Press All-America team presented by Regions Bank. The 6-foot-5, 265-pound defensive end with startling quickness and a mean streak rarely stops cheering, cajoling and trash-talking.

"Every day we're expected to have the most juice," Young said of the defensive front.

Last year, after star defensive end Nick Bosa went down with an injury in the third game, Young carried the flag for the Buckeyes' "Rushmen," piling up 10 sacks, 15.5 tackles for a loss and 77 quarterback pressures and establishing himself as one of the most dynamic linemen in the country. The Maryland native did it a lot of the time with sore ankles.

Rated as the seventh overall prospect nationally coming out of high school in 2017, Young is bright on the national radar now, and is set up for monster year as the Buckeyes featured pass rusher.

"I feel like looking at the film from last year, I can use my hands a lot better," Young said. "I feel like I can get off the ball better. It's just a lot of stuff where I'm really nitpicky about."

This season he's also expected to set an example.

"The guys like him," Ohio State coach Ryan Day said. "He has a happy-go-lucky personality. I see more seriousness now. I think he knows this is his time to step up and be a leader."

Defensive line coach Larry Johnson can hardly wait to see what's going to happen. He's got a guy who's nearly as good, Jonathon Cooper, at the other defensive end position, experienced interior linemen and tons of depth.

"Chase is going to get double-teamed, so that turns three guys loose," Johnson said. "Our inside guys have to be really good pass rushers. That's been our focus from the day we ended (last) season, to get ready for that. If they double-team Chase, we've got one-on-one on the inside, and I'll take that all day. And we'll move Chase around from right to left, so they'll have to find him."

Young will be expected to pace a defense that struggled during stretches last season and has something to prove.

Day brought in new defensive coaches — Johnson is the only holdover — and installed a new scheme that is in some ways more basic. Safety Jordan Fuller, a preseason second-team All-American, anchors the secondary, and all three starting linebackers return.

None of Young's teammates will be telling him to tone down the talking, although he may need to get a handle on his enthusiasm so it doesn't hurt the team. In the Rutgers game last year, Young got himself ejected for unsportsmanlike conduct because of his exuberant celebrating.

"He's awesome," linebacker Pete Werner said. "He gets me pumped up. As far as taking a leadership role he's made big steps. He's that guy now on the team that everybody is going to learn from."

The transfer from Louisville, who missed all but a few plays last season with a gruesome wrist injury, was part of a relentless pass rush for the Gators against Miami. Florida finished with 10 sacks and they were spread around. No player had more than two. Greenard finished with 1.5 and looked very much like the player who had a breakout season for the Cardinals in 2017.

The speedster had a crucial muffed punt and was kept quiet (two catches for 28 yards) by Florida cornerbacks C.J. Henderson and Marco Wilson.

Little is a preseason first-team All-American for No. 25 Stanford. A consensus five-star recruit and No. 1 prospect in the country in 2017, the 6-foot-7, 315-pound left tackle is a force. Fisher, a second-team All-American, has proven to be one of the best defensive players ever at Northwestern with 229 tackles in his first two seasons.