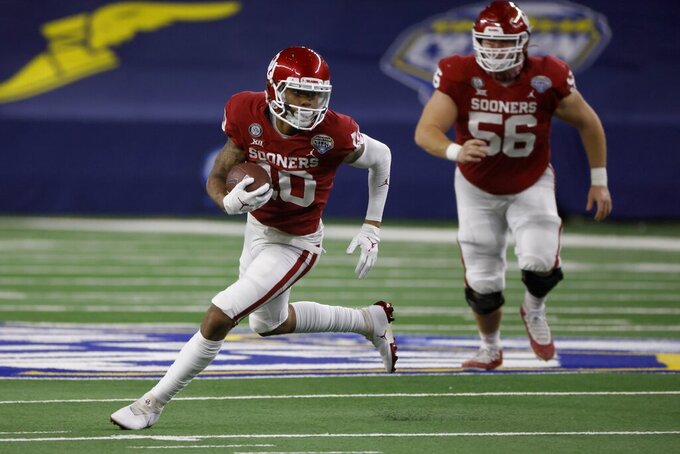 Oklahoma wide receiver Theo Wease (10) sprints to the end zone for a touchdown against Florida after catching a pass as offensive lineman Creed Humphrey (56) watches during the first half of the Cotton Bowl NCAA college football game in Arlington, Texas, Wednesday, Dec. 30, 2020. (AP Photo/Ron Jenkins)

NORMAN, Okla. (AP) — Oklahoma has had a flurry of roster activity in the days following its blowout win over Florida in the Cotton Bowl.

Receiver Charleston Rambo announced plans to enter the transfer portal Monday on Twitter. He was a preseason All-Big 12 receiver this season, but quarterback Spencer Rattler tended to favor other wideouts.

Rambo was best known as a speedster who stretched defenses. In his most successful season, he caught 43 passes for 743 yards and five touchdowns in 2019. He caught 25 passes for 312 yards this season. He leaves having caught 76 passes for 1,180 yards and nine touchdowns in his three-year career with the Sooners.

Running back T.J. Pledger is also expected to transfer. He would have been in a logjam — starter Rhamondre Stevenson is coming back, and coach Lincoln Riley recently announced that running back Kennedy Brooks has opted back in for 2021.

Brooks has rushed for 2,067 yards and 18 touchdowns in his career at Oklahoma. Freshman backs Seth McGowan and Marcus Major showed promise last season -- both gained more than 100 yards from scrimmage in the Cotton Bowl.

Meanwhile, several players have announced they will leave early to pursue NFL careers.

Offensive linemen Creed Humphrey and Adrian Ealy are leaving. Humphrey was a third-team AP All-American this season. Ealy was a second-team AP All-Big 12 selection. Both have accepted invitations to play in the Senior Bowl.

Cornerback Tre Norwood also announced his intentions to leave and prepare for the draft. The junior returned an interception for a touchdown in the Cotton Bowl win over Florida. He leaves Oklahoma with 111 tackles, six interceptions and 14 passes defended.

It's not all bad news for the Sooners, though. Along with Brooks, defensive lineman Jalen Redmond is opting back in for 2021. He led the team with 6.5 sacks in 2019 and was third on the team in tackles for loss.