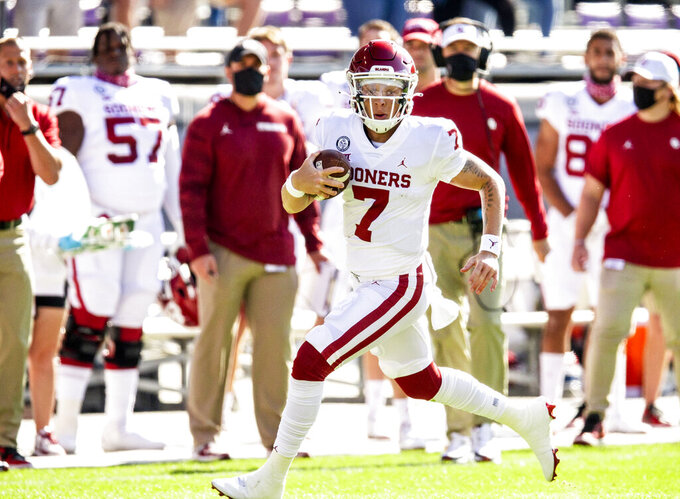 Oklahoma quarterback Spencer Rattler (7) carries the ball during the first half of an NCAA college football game against TCU, Saturday, Oct. 24, 2020, in Fort Worth, Texas. (AP Photo/Brandon Wade)

Oklahoma already has two losses and won’t reach the College Football Playoff this season after being selected three straight years. But the Sooners still can qualify for the Big 12 title game. They have won five straight conference titles and can’t afford a loss with Kansas State and Oklahoma State entering the weekend undefeated in league play.

Oklahoma RB T.J. Pledger vs. Texas Tech's run defense. Pledger ran for more than 100 yards in Oklahoma’s wins against Texas and TCU, providing a jolt for what had been a stagnant ground game. Texas Tech is allowing 179.3 yards rushing per game during league play.

Oklahoma: WR Marvin Mims. The speedy freshman has six touchdown receptions in five games and has proven to be a consistent target for quarterback Spencer Rattler. Mims had four catches for 132 yards and two touchdowns against TCU and had 193 all-purpose yards on his way to being co-Big 12 offensive player of the week.

Texas Tech: QB Henry Colombi. He led the Red Raiders to a win over West Virginia last week in his first start. He completed 22-of-28 passes for 169 passing yards and a touchdown and ran 11 times for 40 yards and another score. Oklahoma leads the Big 12 in rushing defense, allowing just 101.8 yards per game in league play, so Tech’s fortunes could rest on Colombi’s arm.

Oklahoma coach Lincoln Riley is a Texas Tech graduate. In the five games he’s coached against the Red Raiders as offensive coordinator or head coach with the Sooners, Oklahoma has won them all and averaged 683 yards per game. ... Oklahoma has won eight straight in the series. ... Oklahoma has scored at least 28 points in a school-record 57 consecutive games.