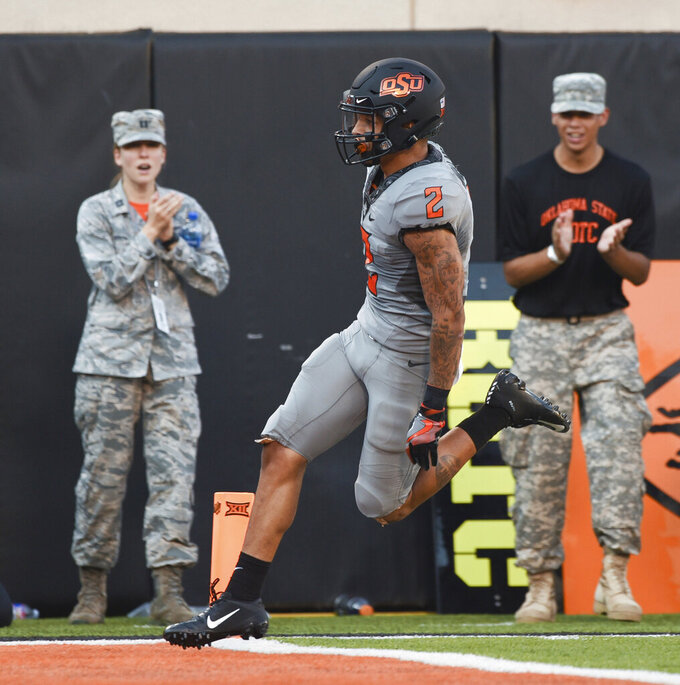 Oklahoma State will play at Tulsa on Saturday in its first game since billionaire donor T. Boone Pickens' death.

Pickens, a 1951 graduate of what then was Oklahoma A&M, died Wednesday at age 91 . Much of the $652 million he donated to Oklahoma State went to athletic facilities, including the football stadium that bears his name. An Oklahoma State spokesman said the Cowboys will wear helmet stickers in his honor.

"The greatest Cowboy of them all has taken his last ride," Oklahoma State athletic director Mike Holder said in a statement. "It will never be the same again. We could never thank him enough for all that he did for our university. He gave us everything he had, and all that he asked in return was that we play by the rules and dream big. He was living proof that anything is possible if you're wearing orange. 'Great ride Cowboy, great ride!'"

The Cowboys opened with a 52-36 win at Oregon State and followed that with a 56-14 win over McNeese State. The Cowboys rank eighth nationally in total offense and ninth in scoring offense.

It will be a tough task for Tulsa in its home opener.

"Just like always, they're very potent on offense," Tulsa coach Philip Montgomery said. "They're very sound and aggressive defensively. So we know we got our hands __ we know we have our job cut out for us, but we're excited about the opportunity and ready to be at home."

The Golden Hurricane lost their opener 28-7 at Michigan State, but bounced back last week to defeat San Jose State 34-16.

"They played excellent, in my opinion, at Michigan State and out west over the weekend," Oklahoma State coach Mike Gundy said. "They put It together offensively the other night out against San Jose State."

Oklahoma State's Tylan Wallace has picked up where he left off last year. Last season, Wallace caught 86 passes for 1,491 yards and 12 touchdowns. This season, he's tied for the national lead with five touchdown receptions. The preseason AP All-American gained 180 yards and three touchdowns on just five receptions against McNeese State — a performance that left an impression on Montgomery.

"His first touchdown the other night, they're just throwing a little now out to him and he gets back outside, makes one guy miss and then he outruns three or four other ones down the sidelines," Montgomery said. "So had a lot of YAC (yards after catch) to that play, but he's also stretched the field."

For years, Tulsa has been known for its prolific offensive play. So far, it's a steady defense that has kept the Golden Hurricane competitive. Linebacker Cooper Edmiston leads the way with 19 tackles. Defensive end Trevis Gipson has 4.5 tackles for loss already.

"I just like how they play," Gundy said. "I think they are a good defense and they are playing well."

Quarterback Spencer Sanders was named the Big 12 Newcomer of the Week after passing for 250 yards and three touchdowns and rushing for 51 yards against McNeese. He ranks fifth nationally in passer efficiency rating.

Oklahoma State running back Chuba Hubbard looks to bounce back after a rough week. He opened the season with 221 yards and three touchdowns against Oregon State, but he had just eight carries for 44 yards against McNeese State and fumbled once, though Oklahoma State recovered. Gundy said it wasn't all Hubbard's fault.

Tulsa's Shamari Brooks had his ninth career game with at least 100 yards against San Jose State with 140 yards on 29 carries. He has 1,794 yards rushing and 18 touchdowns in his career. Corey Taylor has 1,034 career yards rushing and 15 scores. He has just 10 carries this season, but has proven capable. The backs could be important as Tulsa tries to control the pace and keep Oklahoma State's offense off the field.