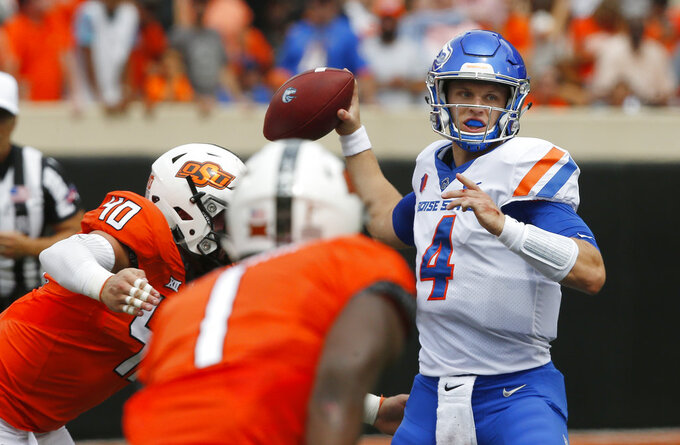 The Cowboys have tallied 16 sacks in their first three games with new defensive coordinator Jim Knowles' aggressive 4-2-5 defense. The Cowboys pressured Boise State quarterback Brett Rypien all day Saturday and tallied seven sacks in a 44-21 victory over the Broncos, who had been ranked 17th.

"Seven sacks is a bold picture, it's a big dream," Knowles said. "I knew we'd have some tools in our chest to play aggressive and create havoc."

Preseason All-Big 12 pick Jordan Brailford is the centerpiece. The 6-foot-3, 250-pound defensive end had three sacks in the first half against Rypien and has five sacks overall this season.

"You got a guy that's big, strong, athletic and can run," Knowles said. "He looks like a grown man and plays with the agility of a linebacker."

Brailford's teammates got in on the action against Boise State, too. Defensive end Jarrell Owens had two sacks, linebacker Devin Harper had 1½ and linebacker Calvin Bundage had a half-sack. It's impressive stuff for a unit that had just 30 sacks in 13 games last season.

The Cowboys, who jumped nine spots from No. 24 after their victory, will take their swarming defense into a matchup with high-scoring Texas Tech next Saturday. The Red Raiders defeated Houston 63-49 on Saturday, a week after they scored 77 against Lamar.

"It's important for us to be able to create that pressure to try and keep momentum on our side," Brailford said. "We had a great performance tonight, but we have to come in tomorrow and continue to work and try and keep it going."

Knowles, previously the defensive coordinator at Duke, likes what he's seeing. Last season, the Cowboys gave up 62 points to Oklahoma and eventual Heisman Trophy winner Baker Mayfield, 45 in a loss to Kansas State and 44 in a loss to TCU.

Oklahoma State, which was ranked 24th last week, showed signs of improvement on defense in its first two games this season, but those contests were against Missouri State and South Alabama. Boise State is a traditional power with an NFL prospect at quarterback. The Cowboys were glad to see the changes worked when the competition improved.

"We faced a really good team that's really solid," Brailford said. "It was a good test for us to see where we were defensively. I think as a defense, we really stepped up to the occasion today."

"What we didn't do is run the ball," Boise State coach Bryan Harsin said. "We were giving up too much penetration. You saw where we handed the ball off and there was a guy three or four yards deep in the backfield. That can't happen."

Brailford said the improvement has been about mentality as much as execution.

"Our guys practice hard every day," he said. "There's a culture here and we don't take any days off. We pride ourselves on going hard all the time, and that shows on game day."