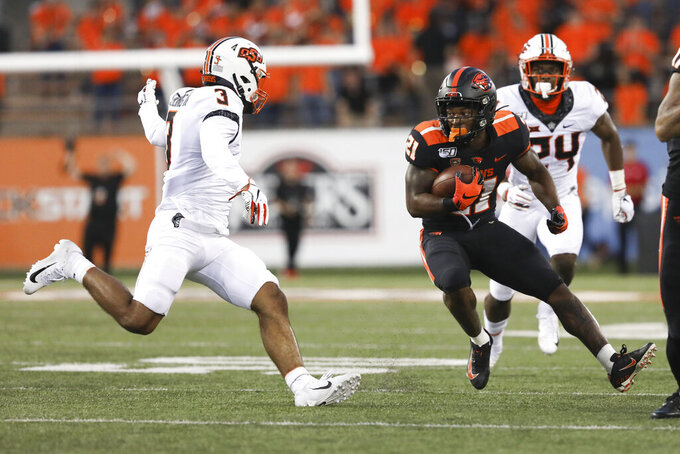 Sanders made the most of his debut for Oklahoma State, throwing for 203 yards and three scores in a 52-36 victory over Oregon State on Friday night.

Hubbard rushed for 221 yards and three touchdowns for the Cowboys, while Tylan Wallace caught five passes for 92 yards and two touchdowns. Oklahoma State finished with 555 yards of total offense.

"I was nervous, it's my first game," Sanders said. "But Chuba, he was helping me a lot. He kept getting my mind off it. Watching him open up on that first drive it gave me a shock of electricity."

Sanders, a highly touted recruit out of Denton, Texas, had competed throughout the spring and preseason camp with Hawaii graduate transfer Dru Brown for the starting nod. Cowboys coach Mike Gundy did not reveal his starter until game time.

"About the middle of last week we felt he gave us the best chance to win the game," Gundy said about his decision.

It was the season opener for both teams. The Cowboys finished 7-6 overall and 3-6 in the Big 12 last season, defeating No. 24 Missouri 38-33 in the Liberty Bowl.

The Beavers went 2-10 overall and 1-8 in the Pac-12 in former quarterback Jonathan Smith's first season as coach.

Oregon State also had a preseason quarterback competition, but Smith named Jake Luton the team's starter late last week. Luton was granted a sixth year of eligibility after being limited by injuries in his first two seasons at Oregon State. He competed for the job in preseason camp with Nebraska transfer Tristan Gebbia.

Luton threw for 251 yards and three scores against the Cowboys. Isaiah Hodgins caught nine passes for 170 yards and two touchdowns.

"Not good enough," Luton said. "If we want to win games, we've got to play better on both sides of the ball."

The Beavers had a promising start on their opening drive when Luton's 29-yard pass found Hodgins, the team's leading receiver with 59 catches for 876 yards and five touchdowns last season.

The Cowboys answered with Hubbard's 6-yard TD run to tie it at 7-all. Hubbard, a preseason All-Big 12 selection, emerged as a freshman when Justice Hill was injured late last season. In the last four games, Hubbard averaged 106.3 yards and 5.4 yards per carry. He rushed for 145 yards and a touchdown in the Liberty Bowl.

After trading field goals, LD Brown's 6-yard touchdown run put the Cowboys ahead with 9:41 left in the first half. They extended the lead to 31-10 on a pair of touchdown passes to Wallace, a Biletnikoff finalist last season who caught 86 passes for 1,491 yards and 12 touchdowns.

Oregon State added a touchdown before the break, with Luton hitting Tyjon Lindsey with a 1-yard pass, but a two-point conversion attempt failed.

Hubbard had a 2-yard TD run to open the second half before Hodgins' 10-yard scoring reception closed the gap to 38-23 for the Beavers. On Oklahoma State's next drive, Hubbard answered with an explosive 53-yard touchdown run.

Jack Colletto added a 1-yard touchdown run for the Beavers early in the fourth quarter — and again a conversion attempt failed. C.J. Moore's 11-yard TD catch put the Cowboys up 52-29 for the Cowboys with 9:39 left but the Beavers wrapped up scoring for the game with Gebbia's 5-yard pass to Kolby Taylor.

"I told our team, game one, we've got to learn a ton about ourselves," Smith said about the team's opener. "We've got to watch this tape tomorrow and look at the details and find ways to improve. Long football season ahead of us, we've got an opportunity next to play another game and play better football and that's what I'm gonna ask these guys to do. And I know they'll do it."

Oklahoma State: Friday night's game is the first ever between the two teams. They'll open the 2020 season in Stillwater. ... Sanders is the first freshman to start a season opener for the Cowboys since Wes Lunt in 2012. ... Gundy said afterward: "This is not a very easy place to get to to play a game. I was a little concerned about guys losing their focus."

Oregon State: Oregon State did not hold a conference opponent to fewer than 500 yards last season and gave up an overall average of 45.7 points and 536.8 yards per game — leaving the team ranked 128th in the nation.

DELAY: The game was delayed for several minutes early in the second half because the coaching staffs were stuck in the elevator at Reser Stadium. "It was earth to Houston, Houston to earth. There was nobody up there," Gundy said.