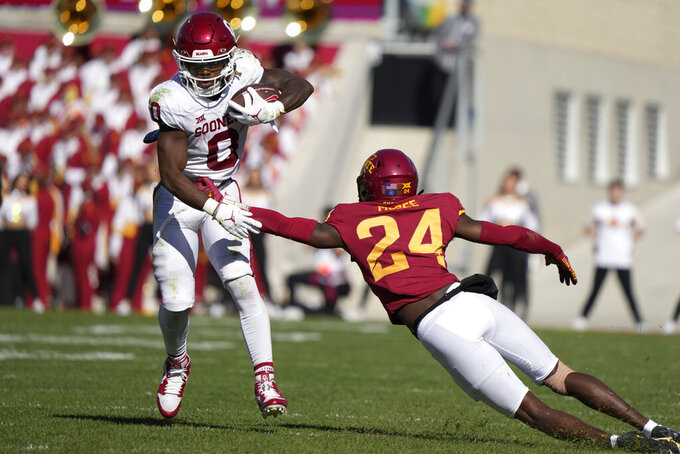 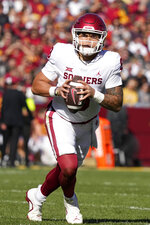 It was the fifth straight loss for Iowa State (3-5, 0-5). The previous four defeats had been by a total of 14 points.

“We capitalized situationally,” Sooners coach Brent Venables said. “Our kicking game, again, was a real weapon for us.”

Oklahoma used a little trickery to get its first touchdown.

The Sooners were lined up for a 19-yard field goal late in the first quarter, but holder Michael Turk flipped the ball to kicker Zach Schmit as he ran past. Schmit's 2-yard touchdown reception put Oklahoma up 10-3 early in the second quarter.

“Everything fell into place,” Schmit said. “I walked in. It was like the Red Sea parting. The blockers did a great job. The scheme was amazing.”

Schmit hit two field goals and an extra point before halftime, accounting for all of the Sooners' first 13 points.

“It doesn't feel like a gamble,” Venables said of the fake field goal. “Obviously, these are very calculated decisions, based on lots of film study.”

Oklahoma's second touchdown was more traditional, a 41-yard pass from Dillon Gabriel to Jalil Farooq in the third quarter.

Iowa State answered with a 12 play, 53-yard touchdown drive — converting two fourth-and-long situations — with 10:29 left in the fourth quarter, trimming the margin to 20-13.

The Cyclones' next two possessions ended with interceptions, including Stutsman's pick. Hunter Dekkers finished 37-for-57 passing for 312 yards and a touchdown to go along with the three picks.

“Right now, it is not where we need it to be,” Cyclone coach Matt Campbell said of the running game. “And it needs to be there for us to be successful offensively.”

Both offenses struggled early, as they have for much of the season. Oklahoma used a little creativity, scoring a touchdown on a fake field goal. But the Sooner's next four drives netted an average of 20 yards. Iowa State averaged 1.6 yards on its first 18 rushing attempts.

While the rest of Iowa State's offense is struggling, receiver Xavier Hutchinson is putting together a stellar season. He has caught a pass in 33 straight games (every game of his career) and began Saturday leading the nation with 9.6 receptions per game. His ninth catch Saturday came in the fourth quarter.

Oklahoma hosts Baylor on Saturday. Kickoff time has yet to be determined.