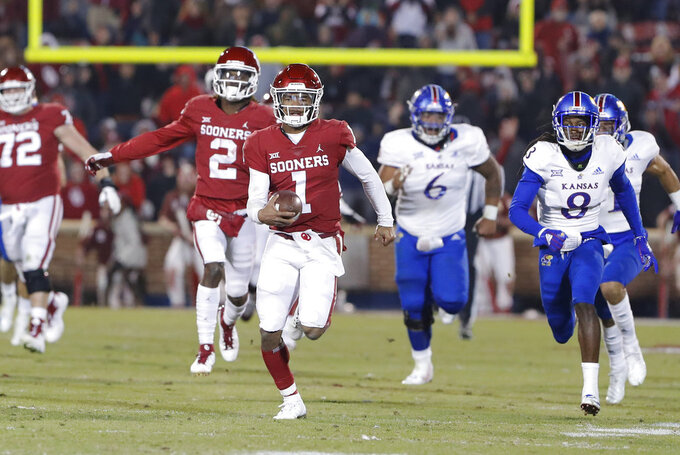 Oklahoma quarterback Kyler Murray (1) runs for a touchdown ahead of Kansas defenders during the second half of an NCAA college football game in Norman, Okla., Saturday, Nov. 17, 2018. Oklahoma won 55-40. (AP Photo/Alonzo Adams)

Holieway led Oklahoma to a national championship as a freshman in 1985. He rushed for 2,713 yards in his career, the most of any quarterback at the school. Thompson, perhaps the most athletically gifted of coach Barry Switzer's triple-option wishbone wizards, led the Sooners to the verge of a national title in 1987.

Murray may be better. In addition to having one of the most efficient passing seasons in college football history, Murray has rushed for 739 yards and 10 touchdowns this season — the most rushing yards for an Oklahoma quarterback since Thompson ran for 824 yards in 1988.

Thompson sees Murray as the only Oklahoma quarterback who has ever been skilled enough as a runner and accurate enough as a passer that he could have starred in both the wishbone and Air Raid eras.

"I'm in awe of what I see him doing," Thompson said. "I can very easily see him dragging the toe and riding the fullback like we used to do in the old days."

Murray's speed is key; he said Monday that he ran a 4.3-second 40-yard dash earlier in the year. Drafted ninth overall by the Oakland A's in the 2018 Major League Baseball draft, Murray had a 67-yard touchdown run against Texas and a 75-yard scoring run against Kansas.

"He reminds me of me, but a whole lot faster," Holieway said. "He has that breakaway speed. That makes all the difference."

West Virginia (8-2, 5-2 Big 12) will have to deal with Murray on Friday in a showdown that will determine who plays for the Big 12 title. The 12th-ranked Mountaineers know all about Murray's speed — he busted loose for a 66-yard run on the first play of Oklahoma's 59-31 win last year .

Murray doesn't run all the time, either, allowing for the element of surprise. He ran for 99 yards and three touchdowns on just eight carries in the Sooners' 55-40 victory over Kansas last Saturday.

"For me, my job is to deliver the ball to my teammates through the pocket," he said. "When stuff breaks down, I've got the ability to make something happen."

Thompson, who averaged 5.9 yards per carry in his career and finished with 1,584 yards rushing in two seasons, said Murray is in the same category of speed as he was.

"Just his explosion and first-step movement," Thompson said. "And when he makes a decision to go, it's go. It's not, 'I'm going to think about it,' or 'I'm trying to get there.' It's, 'I'm getting there.'"

Murray's execution of the zone-read option out of the shotgun looks like an updated version of days gone by at Oklahoma.

"There's times when he has openings or he has a zone-read play where (defenses) collapse on the back and he doesn't pull it," West Virginia defensive coordinator Tony Gibson said. "And there's times where they do account for him and he pulls it and he'll make a guy miss. There's nothing that gives it away when he's going to take off or when he's not."

"It's the ability to have vision and make people miss," Thompson said. "And it's not something you can coach, man. It's natural."