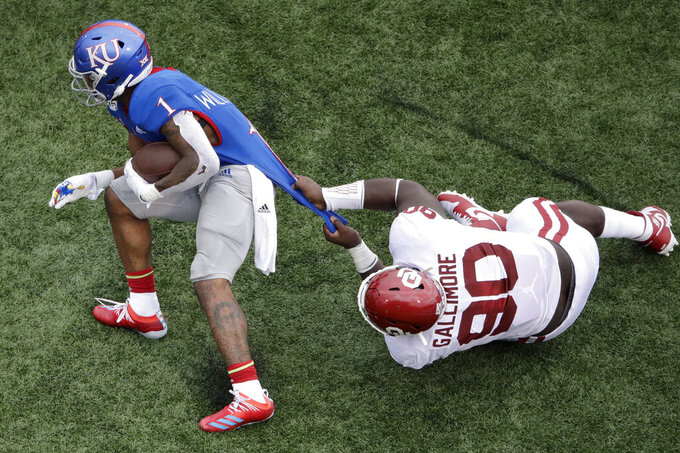 He was fired the day after a 48-45 loss to the Longhorns.

This year, things appear to have changed under new defensive coordinator Alex Grinch. The Sooners are allowing just 19 points per game and have held their past four opponents to 20 or fewer points, and a swagger has developed with the success.

Texas coach Tom Herman knows he will see something much different on Saturday when No. 6 Oklahoma and No 11 Texas meet in Dallas.

"I think you just see them playing so hard and flying to the football," Herman said. "Really aggressive. Not terribly complex. Some of the things they do with their line movements and twists and stunts are going to be difficult for our offensive line and quarterback. (Sooner defenders) are in the right place at the right time, and they're getting there with their hair on fire and really physical."

Oklahoma linebacker Kenneth Murray remembers last year's loss. Though the Sooners got revenge in the Big 12 Championship Game, the regular-season game still sticks in his mind. He looks forward to the opportunity Saturday's game presents.

Murray leads the way with 37 tackles. The preseason Big 12 Defensive Player of the Year also has four tackles for loss. Riley said Murray has bought in and adjusted to Grinch's system.

"When you have a good mentality and work hard and do everything right, the results are going to show eventually," Riley said. "He's starting to play at a pretty high level for us."

"It's going to be a big factor, I think, on all sides," Riley said. "It always is. Not anything new. It'll certainly be a little bit of strength versus strength there. As far as kind of how the teams have played up to this point, it'll be a fairly impactful stat when we look at it after the game."

"We'll be burning the midnight oil trying to figure out a way to score some points," Herman said. "I've been impressed with Coach Grinch in his short time there and the level they are playing at right now."