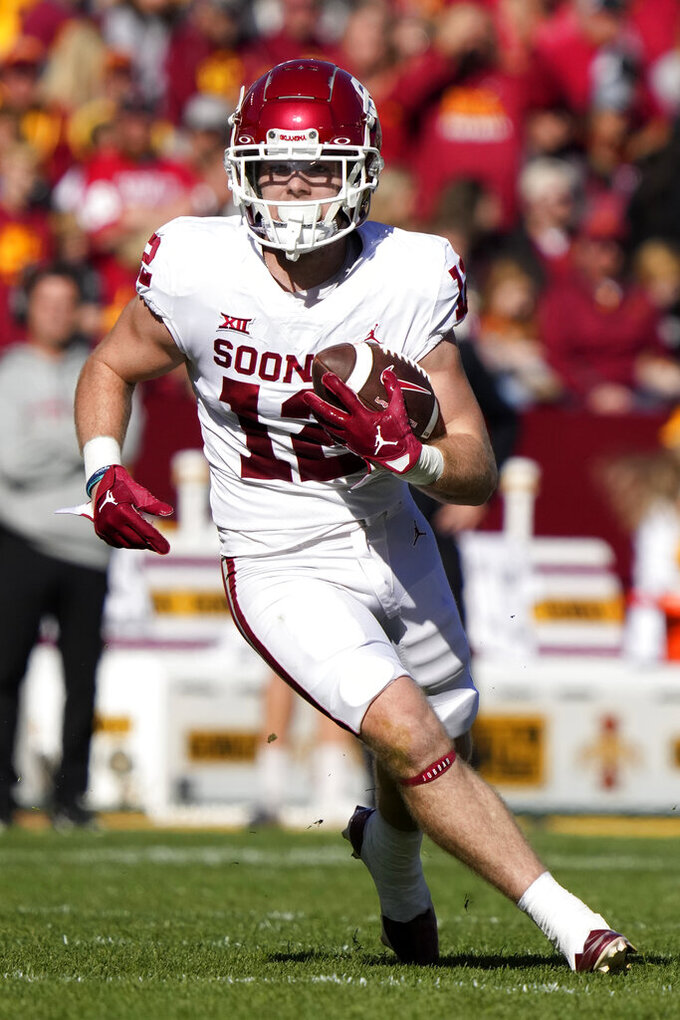 FILE - Oklahoma wide receiver Drake Stoops (12) runs up field during the first half of an NCAA college football game against Iowa State, Saturday, Oct. 29, 2022, in Ames, Iowa. Stoops is one of many Big 12 players who are in the running for the Burlsworth Trophy, which names the nation's top player who starts his career as a walk-on. (AP Photo/Charlie Neibergall, File)

NORMAN, Okla. (AP) — Oklahoma receiver Drake Stoops is much more than the son of a Hall of Fame football coach.

Stoops – whose father, Bob, led the Sooners to the 2000 national title – has gone from walk-on at the beginning of his college career to scholarship player who has started six of his team’s nine games. The fifth-year player has caught 21 passes for 191 yards and two touchdowns this season while providing veteran leadership on a team filled with young players and transfers.

“You want to have a whole locker room full of guys like that,” Oklahoma coach Brent Venables said. “You want young people of excellence. You want as many guys like him as you can. You hope other people learn from them."

Stoops was Oklahoma’s nominee for the Burlsworth Trophy, which goes to the top player in the nation who started his career as a walk-on. Former Oklahoma quarterback Baker Mayfield won the honor twice.

This season, Iowa State tight end Jared Rus, Kansas receiver Quentin Skinner, Kansas State linebacker Austin Moore, Oklahoma State kicker Tanner Brown, Texas Tech receiver Xavier White and West Virginia kicker Casey Legg joined Stoops as Big 12 players initially in the running for the Burlsworth Trophy. Though none of the conference’s players made it through to the semifinal round of consideration, they have been key contributors for their programs this season.

Legg played soccer in high school at West Virginia’s Cross Lanes Christian School, which doesn’t have a football team. At one game, a supporter for an opposing team asked Legg’s mother if he had ever kicked a football. He hadn’t, but his curiosity was piqued after his mother relayed the conversation.

First, he had to buy a football and a tee. He kicked well in an empty college field in Charleston and fell in love with the sport.

“That was probably out of complete beginner’s luck because I had no idea what I was doing,” he said earlier this season. “I just look at the ball and kick it. And I remember that very clearly, that I loved it and wanted to kick footballs.”

It turns out that West Virginia was looking for a kicker. Then-coach Dana Holgorsen invited Legg to campus for a tryout. He earned a roster spot and waited his turn.

He did some placekicking in 2019 but it wasn’t until 2021 that he earned the starting job. Legg has made 38 of 46 career field goals, including all 12 attempts this season. He has made all 82 extra-point attempts.

A year ago last month, with Legg's mother in attendance, coach Neal Brown announced to the team that Legg had earned a full scholarship.

Rus played linebacker and running back before he became a tight end. He tore a knee ligament in the spring and was expected to miss six months, but he made it back in four, allowing him to play at the start of the season.

“I definitely don’t have the best talent, but working hard and doing the right things is going to get noticed by somebody like coach (Matt) Campbell,” Rus said. “I’m thankful for him being on my side and helping me out so much and helping so many other people out."

The Lubbock, Texas, native initially went to Dodge City Community College in Kansas. He joined the Red Raiders as a receiver in 2019, played running back in 2020 and '21 and went back to receiver this year.

He has been at his best recently. He had 27 catches for 366 yards and four touchdowns in four October games, including two 100-yard games.

Kansas put Skinner on scholarship this past summer. He has 18 catches for 309 yards and four touchdowns and two carries for 41 yards and has been a key producer during the Jayhawks' surprise season.

Moore has 61 total tackles, 1 1/2 sacks, an interception and two forced fumbles for Kansas State. The linebacker was put on scholarship in the spring of 2021.

Brown, a super senior, ranks eighth nationally in scoring. He has made 15 of 16 field goals and all 36 of his extra-point attempts.