OL Smith, DL Solomon will play this season for Tennessee 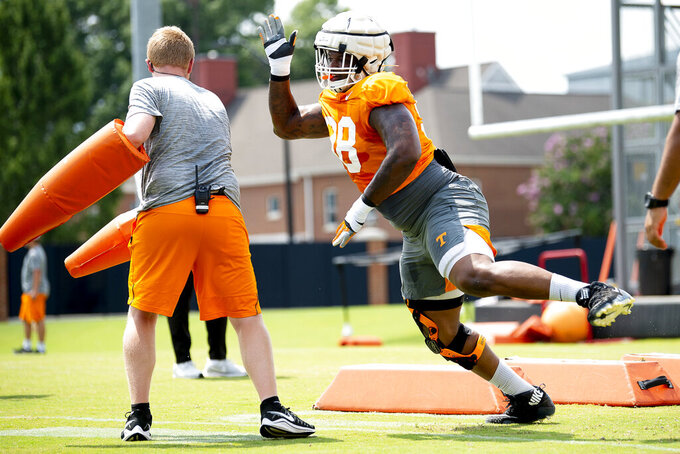 In this Aug. 10, 2019, photo, Tennessee defensive lineman Aubrey Solomon (98) runs a drill during the NCAA college football team's practice in Knoxville, Tenn. Solomon has received an NCAA waiver enabling the Michigan transfer to play for the Volunteers immediately rather than sitting out the 2019 season. Solomon's availability provides a giant boost to a Tennessee defensive line that has no returning starters. (Calvin Mattheis/Knoxville News Sentinel via AP)

KNOXVILLE, Tenn. (AP) — Tennessee got a major boost on each side of the line of scrimmage just in time for the start of the season.

Both players should be available Saturday when Tennessee hosts Georgia State. Their additions strengthen the offensive and defensive lines, two of Tennessee's greatest concerns heading into the season.

Smith is arguably the best overall player on Tennessee's roster, but his career was in jeopardy after blood clots were discovered in his lungs.

"My family and I consulted with several of the best doctors in the country, and a plan has been developed that allows me to compete with my teammates on game day," Smith said in a statement released by the university. "My family and I are confident in that plan. The coaches and staff here at Tennessee have always had my best interests at heart and I can't thank them enough. Thanks to all of the fans and my teammates for all of their support."

Tennessee isn't specifying any details of the plan that has been formulated to enable Smith to play.

Smith missed spring practice in 2018 after the blood clots were first diagnosed. He was cleared to play shortly before that season and started at left tackle for Tennessee's first seven games, but he was shut down for the remainder of the season when the clots were discovered again.

He had been practicing this spring and summer with limited contact but was a full participant in a couple of recent sessions.

"That's a great thing for Trey," Pruitt said. "This is something that Trey and his family decided to do, along with our doctors here at the university and people across the country have come up with a plan for him to be able to play the game that he loves."

Although Smith played primarily tackle last season, Pruitt indicated the junior would start out at guard this year. Pruitt wouldn't say how much Smith might play this week or whether there was any sort of plan to limit how many snaps the junior plays each week.

"We've got a plan," Pruitt said. "We're really keeping it in-house. I don't think it's smart to let our opponents know how many snaps Trey's going to play or not going to play."

Earlier in the day, Pruitt announced that the NCAA had granted a waiver enabling Solomon to play immediately rather than sitting out a season under NCAA transfer rules.

"I'm beyond excited to be playing football this season," Solomon said in a statement released by the university. "I can't wait to suit up with my brothers."

Solomon's availability provides a boost to a defensive line that has no returning starters. The unit lost its most experienced returning player when Emmit Gooden tore his right anterior cruciate ligament this month.

Solomon had been practicing with Tennessee while awaiting word on his eligibility.

"That's a guy that's worked really hard since he's been here," Pruitt said. "I'm glad to see that he gets rewarded, gets a chance to compete and play."

Pruitt has described Solomon as someone who has the ability to play all three downs with the versatility to line up inside or outside.

Solomon announced in December he was transferring to Tennessee. The former five-star recruit played five games and made six tackles for Michigan while struggling with injuries last season. He played 13 games and had 18 tackles in 2017.