For one game, No. 1 Alabama reverts to ground-and-pound 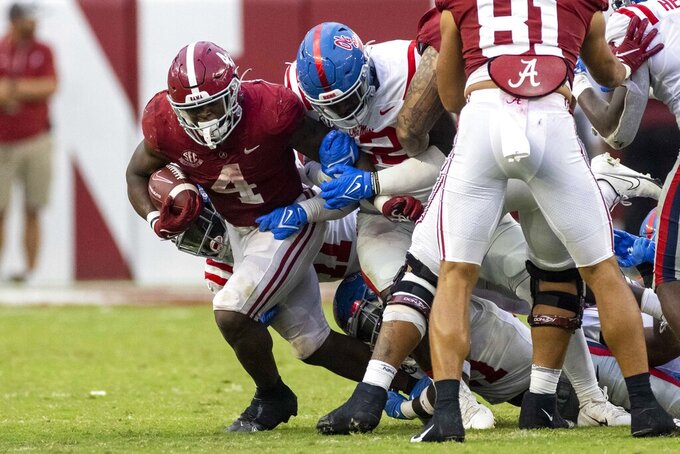 Alabama running back Brian Robinson Jr. (4) breaks through the Mississippi line with Mississippi defensive lineman Tariqious Tisdale (22) holding on to him during the second half of an NCAA college football game, Saturday, Oct. 2, 2021, in Tuscaloosa, Ala. (AP Photo/Vasha Hunt) 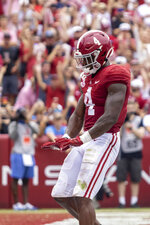 The top-ranked Crimson Tide haven’t gone back to old-school, pound the ball and keep it as long as possible football.

It was just the best way to beat Mississippi.

Offensively, the game plan featured a heavy dose of feeding the ball to bruising tailback Brian Robinson Jr. Robinson got 36 carries for 171 yards and four touchdowns — all career highs by a large margin — in Saturday's 42-21 win over the Rebels, who fell five spots in the rankings to No. 17 on Sunday.

“It‘s not really the personality of this offense,” Tide coach Nick Saban said.

Instead, it was the best way to keep the ball from Matt Corral and the Rebels’ offense, which came in leading the nation in scoring and yards per game.

And it was the best way to attack a defense that sometimes rushes three and drops eight defenders into coverage.

Alabama will likely employ a much different game plan Saturday at Texas A&M, which dropped from the rankings with a loss to Mississippi State.

“It was a combination of this is how they line up as well as this is the type of game it needs to be,” Saban said. “It’s not really how we want to play. It’s not how we’ve played all year. And it’s not going to be the style that we want to continue to play. We have to do the things we have to do to try to win the game.

“Playing the way we played (Saturday) on offense was the way we needed to play to win the game.”

This one more closely resembled the old-style Alabama teams used to dominate with before Saban brought in current Ole Miss coach Lane Kiffin to get the Tide more in line with the times.

Robinson didn’t mind one throwback Saturday. It was really the first starring role for the Tuscaloosa native, a career backup until his fifth season.

And he's seen similar-type performances from Alabama offenses in years past. The Tide even lined up a couple of times in I-formation with Young taking the snap under center in the fourth quarter.

“It actually did feel like just old-school 'Bama football,” Robinson said. "I had never had over 30 carries in all the time I played football.

“It started to feel like the classic Alabama pound the football type team.”

Kiffin remembers Robinson from his days at Tuscaloosa's Hillcrest High School, where the 6-foot-1, 225-pounder emerged as a four-star prospect after Kiffin's tenure as offensive coordinator at Alabama.

But Kiffin was even more impressed by Alabama left tackle Evan Neal, not to mention linebacker Will Anderson Jr.

“They ran (Robinson) a lot to their left side,” the Ole Miss coach said. "I guess the left tackle might be the first pick in the draft since 31 (Anderson isn't draft eligible) cause he’s huge. And they ran behind him a lot. The guy’s a dominant player and Brian did a really good job and was still in there at the end.

“We actually finally stopped him there in the fourth quarter twice.”