One losing streak will end when Oregon St hosts Cal 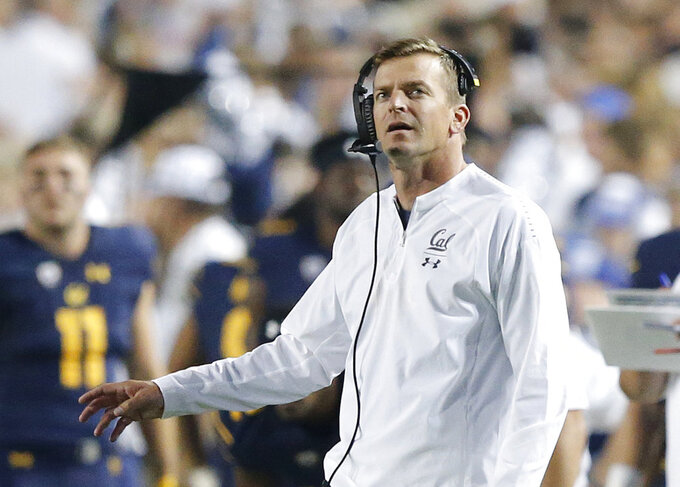 FILE - In this Sept. 8, 2018, file photo, California coach Justin Wilcox looks at the scoreboard during the first half of the team's NCAA college football game against BYU in Provo, Utah. The California Golden Bears are looking for a boost in their game against Oregon State in Corvallis, Ore., Saturday, Oct. 20, 2018, after a three-game losing streak and a demoralizing loss to UCLA last weekend. (AP Photo/Rick Bowmer, File)

CORVALLIS, Ore. (AP) — The California Golden Bears are looking for a boost after a three-game losing streak.

The last thing the team wants is a repeat of last season, when Cal lost four of its last five games to finish fifth in the Pac-12 North above only Oregon State — the team that the Bears face on Saturday with an eye on starting a turnaround.

"We know that we're better than what we were a year ago. The frustration would be us going back into what we were last year," said linebacker Alex Funches. "Everybody on the team is trying to make it evident that we're not pointing fingers. We're pointing thumbs. Not frustrated. We just want to be better."

"This is a pivotal moment for our team in a lot of ways. It's a test of our character and who we're going to be as a program," coach Justin Wilcox said. "The only silver lining is you find out who's who. I believe in our team and the guys we have and what they're going to do this week. The want to and effort's there. The guys compete hard. We have to go out and execute better. I absolutely believe it will turn."

The Beavers, mind you, have not won a league game — home or away — in their last 12 tries, so Cal kind of presents their best opportunity to break that streak, too.

Asked if Saturday's game was a must-win to move forward, Beavers coach Jonathan Smith quipped: "I kind of feel like every game is a must-win game."

The Beavers have the rest advantage after taking last weekend off. Oregon State's last game was a 56-37 loss at home to Washington State.

CAL QB?: Ross Bowers started for the Golden Bears in their opener, but a thumb injury has kept him out since. Cal has played both Chase Garbers and Brandon McIlwain, with McIlwain starting the last two. But offensive turnovers are an issue and Wilcox wasn't revealing his plans this week.

"I would say everything's on the table. We have a plan. Brandon's still developing, as is Chase, as a quarterback," the coach said. "They both can do some good things. We have to clean up the mistakes, especially the critical mistakes. That's our job as coaches to help them do that."

INJURIES: It appears that the Beavers will start Conor Blount at quarterback against the Golden Bears. Blount hurt his shoulder against Washington State but with an extra week's rest he told reporters he's ready to go. Smith said QB Jake Luton, who sustained a high-ankle sprain on Sept. 15 against Nevada, is 50-50. Blount has thrown for 1,017 yards with seven touchdowns and only one interception so far this season.

KEEP AN EYE ON: Cal linebacker Jordan Kunaszyk , who had a career-high 22 tackles, including 14 solo, in the Golden Bears' loss to UCLA last week. The last Cal player with as many tackles in a game was Jerrott Willard, who had 22 in a game against USC in 1992.

KEEP THE OTHER EYE ON: Oregon State freshman running back Jermar Jefferson , who ranks fourth nationally with an average of 144.2 yards rushing per game. With 865 total rushing yards this season, Jefferson only needs 135 more to reach 1,000. The last Beaver to go over 1,000 was Jacquizz Rodgers in 2009 (1,440). Jefferson has rushed for 12 touchdowns this season.

THE COMEBACK: Oregon State will revive its old Benny Beaver mascot with special homecoming uniforms. Benny, who wore a jaunty orange OSU hat, was on the team's helmets back in 1973 and was part of the school's identity from 1951-98. Retro Benny has even been added to the field .