One week later, Oklahoma State ready to take on Tulsa 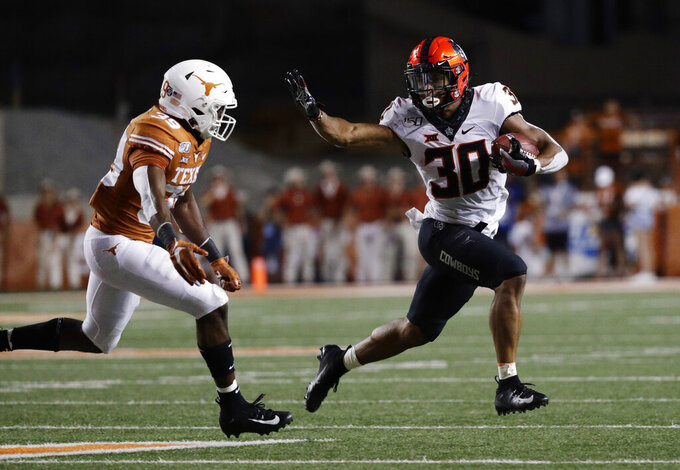 FILE - In this Sept. 21, 2019, file photo, Oklahoma State running back Chuba Hubbard (30) looks to fend off Texas defensive back Montrell Estell during the second half of an NCAA college football game in Austin, Texas. Oklahoma State plays Tulsa this week. The game was initially scheduled Sept. 12, but was postponed five days before that to allow the virus-affected Golden Hurricane more time to prepare for the season. (AP Photo/Eric Gay, File)

STILLWATER, Okla. (AP) — One week after its originally scheduled season opener was supposed to take place, No. 11 Oklahoma State will finally take the field this weekend.

After Tulsa had several players test positive for COVID-19 earlier in camp, the Golden Hurricane had requested an extra week of practice and, conveniently, both teams initially had a bye week Saturday, so it was an easy decision to move the game back a week. Kickoff is at noon Saturday.

Oklahoma State coach Mike Gundy wasn’t necessarily thrilled with having more practices but attempted to utilize the extra time as best as he could.

“It gave us three more practices,” Gundy said. “They’re just so tired of practicing, in my opinion, but the preparation in this sport, and the physicality, is so important, that we have to continue to push through it. But we have allowed them to have more days off just recently.

“We’re dealt a hand and we try to make the best out of it. There’s a lot of uncertainty that we can’t control at this point, and so we tried to take advantage as much as possible with the extra week.”

For Tulsa, which missed nine days of practice from Aug. 12-21 due to multiple positive coronavirus tests, the additional practice time was beneficial.

“Just for the health and safety of our guys, I think it was vitally important for us to have that week, to give guys that opportunity to get in better shape for a four-quarter game,” said coach Philip Montgomery. “I feel a lot better where we are right now compared to where we were at this point last week.”

Other things to watch for on Saturday:

Due to the ongoing pandemic, there will be a much smaller crowd at Boone Pickens Stadium than usual. The stadium, which normally seats 55,509, will have reduced capacity, maxing out at just over 15,000 to provide proper social distancing. Seating is limited in both the club level and the lower bowl. Other safety measures include prohibiting tailgating in the parking lots, requiring all fans to wear masks, erecting Plexiglas barriers at concession stands, and placing sanitizer stations throughout the concourse.

With its reconfigured schedule, Oklahoma State will be playing its only non-conference contest of the season before moving on to Big 12 action next week against West Virginia at home. OSU and the Golden Hurricane also met last year in Tulsa in a series that's billed as the Turnpike Classic. The Golden Hurricane led 21-20 at halftime before the Cowboys rallied to claim a 40-21 triumph. Oklahoma State has won seven straight in the series, including 21 consecutive matchups in Stillwater dating to 1951.

RUNNIN’ DOWN A DREAM

Oklahoma State running back Chuba Hubbard, who rushed for 256 yards and three touchdowns in last year’s meeting with Tulsa, is a primary Heisman Trophy candidate this year. After leading the nation in rushing with 2,094 yards (and placing third with 21 touchdowns) last season, Hubbard finished eighth in the Heisman voting and was named the Big 12 Offensive Player of the Year. He enters 2020 riding a streak of 11 straight 100-yard performances.

Tulsa returns nine offensive starters from last season. That includes quarterback Zach Smith, who threw for 3,279 yards and 19 touchdowns with just nine interceptions, running backs Shamari Brooks (1,046 yards and six TDs rushing) and Corey Taylor II (461 yards and six TDs) and top receiver Keylon Stokes (62 receptions for 1,040 yards and six TDs). The return of Smith, who played 18 games for Baylor, starting 10, in 2016 and ’17 before transferring, marks the first time since 2016 that the Golden Hurricane has had its top QB back from the previous season. Brooks enters the season ranked fifth on Tulsa’s all-time rushing list, needing 1,217 yards to match the record of 3,917 established by D’Angelo Brewer (2014-17).

The contest marks the return to play for Oklahoma State star receiver Tylan Wallace, who missed the final five games of last season due to a knee injury. Wallace recorded 53 receptions for 903 yards and eight touchdowns in 2019, leading the Cowboys in all categories. His 112.9 receiving yards per game ranked fourth in the nation. “I feel like I’m kind of back where I used to be, so I’m ready to go play,” Wallace said. “I feel kind of like the old me now.”