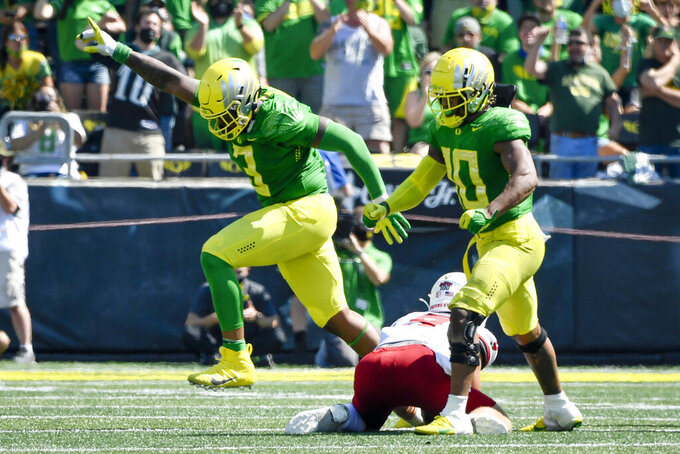 FILE - In this Saturday, Sept. 4, 2021, file photo, Oregon defensive tackle Brandon Dorlus (3) and linebacker Justin Flowe (10) celebrate a sack of Fresno State quarterback Jake Haener (9) during the fourth quarter of an NCAA college football game in Eugene, Ore. Flowe, a freshman, is so pumped to play for the Ducks that sometimes he has to remind himself to slow down a bit and be disciplined. (AP Photo/Andy Nelson, File)

EUGENE, Ore. (AP) — Oregon freshman linebacker Justin Flowe, who made an immediate impact for the Ducks in his first game this season, is out indefinitely with a right foot injury.

Flowe's injury kept him out of the Ducks' stunning 35-28 victory Saturday over Ohio State, which pushed Oregon up to No. 4 in the AP Top 25.

"Always hopeful, but it seems to be a little bit longer term than anything else,” the coach said.

Flowe had 14 tackles and a forced fumble in Oregon’s season-opening victory over Fresno State. His tackles were the most for an Oregon freshman since Troy Dye had 14 in a game in 2016 and earned Flowe Pac-12 Freshman of the Week honors.

Cristobal also said tight end Cam McCormick is out for the season with a right leg injury.

A sixth-year senior, McCormick played in Oregon's first two games of the season after returning from a 2018 ankle injury that required several surgeries.

Oregon Defensive end Kayvon Thibodeaux, who sprained his ankle in the opener and also missed the game against the Buckeyes, is improving but his status for this weekend's game at home against Stony Brook is still undetermined.