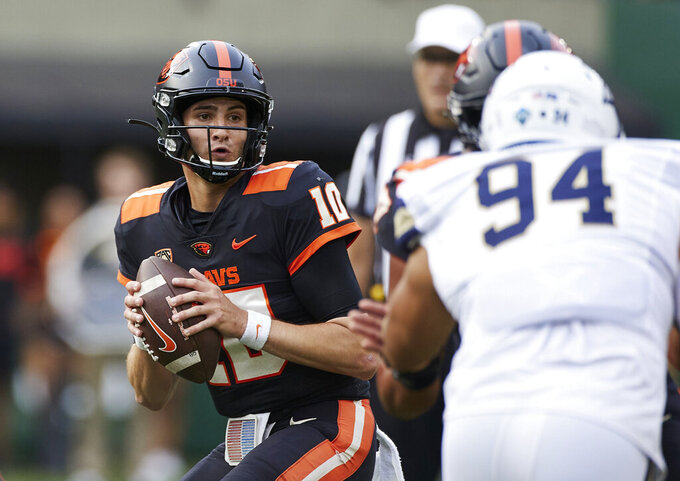 Oregon State quarterback Chance Nolan drops back to pass against Montana State during the first half of an NCAA college football game in Portland, Ore., Saturday, Sept. 17, 2022. (AP Photo/Craig Mitchelldyer)

No. 7 Southern California (3-0, 1-0 Pac-12) at Oregon State (3-0), Saturday. The Beavers have a chance to start the season 4-0 for the first time since 2012. Oregon State beat USC last season 45-27 for its first win in the Coliseum in more than 60 years. There are currently four Pac-12 teams in the latest AP poll, but a win over the Trojans could very well elevate the Beavers into the rankings. Oregon State quarterback Chance Nolan was nominated for Pac-12 offensive player of the week honors after throwing for 276 yards and four scores in a 68-28 win over Montana State. In no time, coach Lincoln Riley has rebuilt the Trojans into a power. They are one win away from matching the total from a year ago (4-8), which were the fewest victories by USC since 1991.

No. 15 Oregon (2-1) at Washington State (3-0), Saturday. Fresh off a 41-20 win over No. 19 BYU, the Ducks head to Pullman to face a red-hot Cougars team led by quarterback Cam Ward. The transfer from Incarnate Word is tied for second in the conference with eight touchdown throws. The Cougars already have a win over a ranked team this season, beating Wisconsin on the road 17-14 earlier this month. The last time Washington State knocked off more than one ranked team in a season was 2018.

Daiyan Henley, Washington State. The linebacker came up big for the Cougars in a 38-7 win over Colorado State last weekend with three sacks and two forced fumbles. He also had 13 tackles as he earned the league’s defensive player of the week honors. He was named to the second team, All-Mountain West squad last season while at Nevada.

No. 13 Utah (2-1) at Arizona State (1-2), Saturday. Sun Devils interim coach Shaun Aguano makes his debut after taking over for Herm Edwards, who was let go over the weekend after a 26-20 record over four-plus seasons. Aguano and the Sun Devils start a tough stretch — No. 13 Utah, at No. 7 USC and home against No. 18 Washington. The Utes have been a slow-starting team, with 14 of their 134 total points coming in the first quarter.