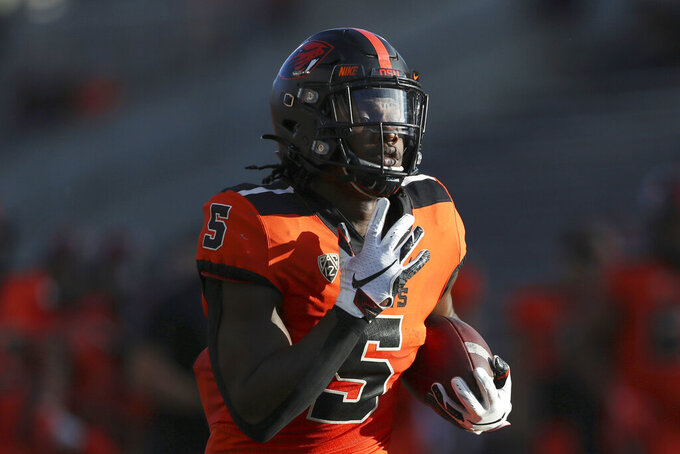 FILE - Oregon State running back Deshaun Fenwick (5) warms up prior to an NCAA college football game against Washington on Oct. 2, 2021, in Corvallis, Ore. The Beavers open the season against a pair of Mountain West opponents. (AP Photo/Amanda Loman, File)

“We’re not a finished product by any stretch,” coach Jonathan Smith said. “But over the four years being here as the head coach, really proud of the development we’ve had, the competitiveness, winning more games than we lost last year.”

Oregon State has steadily risen under Smith: It went 2-10 in his first season, 2018. Last season, the Beavers finished 7-6 — their first winning record in eight seasons.

While the Beavers fell in the LA Bowl to Utah State, Smith recognizes the progress made and that they need to build on it.

Some of the keys to success have moved on, including receiver Trevon Bradford, running back B.J. Baylor and leading tackler Avery Roberts.

But Chance Nolan is back and likely to be the starting quarterback again. And the lineup includes promising freshman running back Damien Martinez, who impressed at the team's spring game, and last season's top returner, Deshaun Fenwick.

“We feel like we have a veteran group that has learned now what it takes to win. We’ve got a lot of those guys back," Smith said. "I’m looking forward to seeing what we can do this year, understanding how competitive, especially this league, is.”

Although there has been a quarterback competition in fall camp, the starting nod will almost assuredly go to Nolan.

A redshirt junior, Nolan started in 12 games for the Beavers last season, throwing 2,677 yards for 19 touchdowns. He had a 64.2% completion rate.

“What I love about Chance is how competitive he is. I think he displays that in his style of play," Smith said. "Being competitive in the pocket but also extending the play, getting some extra yards, gaining first downs.”

The question is who will back him up. The top candidates are Tristan Gebbia, who started in four games in 2020 but didn't play last season because of an injury, and redshirt freshman Ben Gulbranson, also sidelined last season with an injury.

The Beavers beat USC at the Coliseum last year, which was Oregon State's first road win over the Trojans since 1960.

The problem was that it was also Oregon State's lone road victory.

The schedule this year includes a tough game at No. 7 Utah, but the Beavers get to host the Trojans and the No. 11 Oregon Ducks.

Oregon State's Reser Stadium is in the midst of a $161 million makeover, with construction to go on throughout the season.

The west side of the stadium is now a steel skeleton that will eventually become three tiers of new seating. A new $5 million video scoreboard should be working by the team's opener against Boise State on Sept. 3.

“It will be a little bit different for us in a stadium that is half-built ... Playing a season in about half a stadium filled,” Smith said. “But we’re really looking forward to, when (construction) finishes ... to be in one of the best football facilities and stadiums in the country.”

Oregon State expects the stadium to be completed by June.

The Beavers open the season against a pair of Mountain West opponents, first at home against Boise State before a game at Fresno State.

Last season, Mountain West teams were 6-5 against Pac-12 teams, including Utah State's victory over the Beavers in the LA Bowl. It was the third time since 1999 and first since 2008 that the conference has had a winning record over the Pac-12.

Additionally, the Mountain West champion has won four of the past five bowl games against the Pac-12.

The competition between the two leagues should garner more attention as Pac-12 faces an uncertain future with realignment.