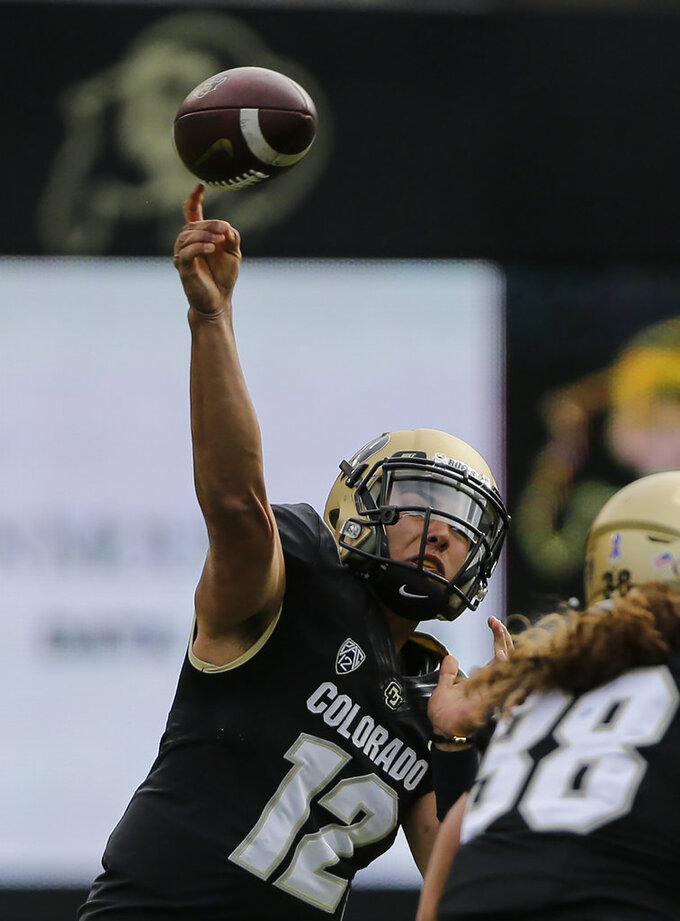 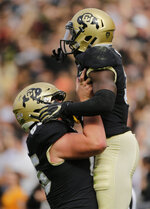 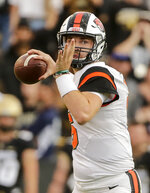 BOULDER, Colo. (AP) — When Travon McMillian ran 75 yards for a touchdown against Oregon State on the first play of the second half, the Colorado Buffaloes admittedly let up, as did their fans.

The Buffs are about to go bowling.

The Beavers are getting bowled over again.

Fans figured they might want to enjoy a beautiful autumn afternoon, streaming to the gates for an early exit from this blowout rather than watching any more of the Beavers' 23rd consecutive road loss.

"I guess you'd call this a gut-wrencher," Colorado coach Mike MacIntyre said after his Buffaloes matched their biggest blown lead in program history in a 41-34 overtime loss Saturday.

"We were rolling," MacIntyre said, "and the wheels just rolled right off."

Jack Colletto's 1-yard sneak in the extra period gave Oregon State its first lead and the Beavers' defense held on four downs inside the 7 to give first-year head coach Jonathan Smith his first league victory.

It was Jake Luton who rallied the Beavers (2-6, 1-5 Pac-12) from a 28-point second-half deficit but they wouldn't have their first road win since 2014 without Colletto, who returned from an awful first half in his first career start to score twice on keepers to keep the comeback alive.

"The guys never got down," Luton insisted.

Even when they trailed by four touchdowns.

The Buffaloes (5-3, 2-3) were seemingly safe when McMillian, who was held to 25 yards on 10 first-half carries, took the first snap of the second half, burst up the middle and raced untouched for a 75-yard score and a 28-point lead.

"We weren't supposed to lose this game," McMillian said.

"I think we might have (coasted) a little bit," Buffs QB Steven Montez said.

Behind Luton's return — he's been dealing with a high ankle sprain — the Beavers answered McMillian's TD with their own 75-yard scoring drive.

Only, this one took 17 plays and 6½ minutes. It included a trio of third-down conversions and two fourth-down conversions, capped by an 8-yard TD to Isaiah Hodgins on fourth-and-2.

"That gave them some momentum," MacIntyre said. "And we didn't sniff the end zone again."

Both teams blew a chance to win it in the final seconds of regulation.

Facing a deficit for the first time all afternoon, Steven Montez hit Jay MacIntyre for 21 yards at the 7. But a keeper netted no yards and a pass into the end zone was broken up. On third down, K.D. Nixon, who caught 13 passes for 198 yards and two touchdowns, couldn't hold onto a third TD pass.

"My best game turned into my worst game," said Nixon, who put the blame for the loss on his shoulders. "We lost the game because of me, so I live with it and I make up for it."

On fourth down, Montez threw incomplete to Juwaan Winfree and the Beavers stormed the field .

"It feels great," Jermar Jefferson said after rushing for 135 yards. "We came in at halftime and coach told us just to keep pushing and that's what we did."

Oregon State: Luton looked like Aaron Rodgers, completing 28 of 39 passes for 310 yards and three touchdowns in the second half while Colletto finished 6 of 14 for 35 yards, no TDs, an interception and five sacks. But the Beavers don't win away from Reser Stadium for the first time since a victory at Folsom Field in 2014 without Colletto's two TD runs, either.

"I love him getting in there and pounding the rock on the goal line," Luton said of Colletto. "I think I might be more excited for him than he is for himself. I love it and he did a great job today and I think us switching back and forth provided a great spark for the team."

Colorado: The Buffaloes thought they'd have bowl eligibility locked up before Halloween and spend November seeing how good of a bowl bid they'd get. Instead, they're mired in a three-game skid and they can't get superstar receiver Laviska Shenault back from a turf toe injury fast enough.

"We just have to stay together," Montez said, "and hopefully we will come out as a better team after this."

Colorado: At Arizona on Nov. 2.