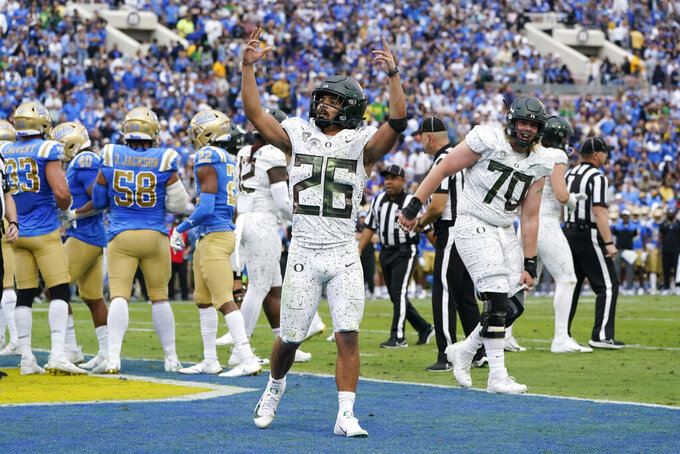 Oregon running back Travis Dye (26) celebrates his rushing touchdown during the first half of an NCAA college football game against UCLA, Saturday, Oct. 23, 2021, in Pasadena, Calif. (AP Photo/Marcio Jose Sanchez)

PASADENA, Calif. (AP) — Travis Dye ended up going from being questionable before Oregon's game against UCLA to setting a Football Bowl Subdivision record.

The junior running back became the first player in FBS history to score touchdown on four consecutive carries during the 10th-ranked Ducks 34-31 victory over the Bruins Saturday.

Oregon coach Mario Cristobal said Dye was dealing with migraine issues before the game, but that he got better closer to kickoff and was able to give it a go.

“They all just rallied around him and showed belief,” Cristobal said.

Dye was not made available for comment after the game.

Before Dye's record day, six players shared the mark with TDs on three consecutive carries, including Illinois' Howard Griffith and Virginia's Tiki Barber. Cal's Joe Ayoob was the last to accomplish it on Sept. 23, 2005, against New Mexico State.

The NCAA does not keep records for consecutive rushing TDs scored by a player for the Football Championship Subdivision, Division II and Division III.

Dye — who finished with 35 yards on 14 carries — also became the seventh Oregon running back since 2000 with at least four rushing touchdowns in a game. The school record is five, shared by Kenjon Barner and Saladin McCullough.

Dye had 5 yards on four carries in the first quarter before scoring on runs of 1 and 4 yards to tie the game at 14. The Ducks trailed 17-14 at halftime, but Dye would score from 1 and 5 yards out in the third quarter to give Oregon a 27-17 advantage.