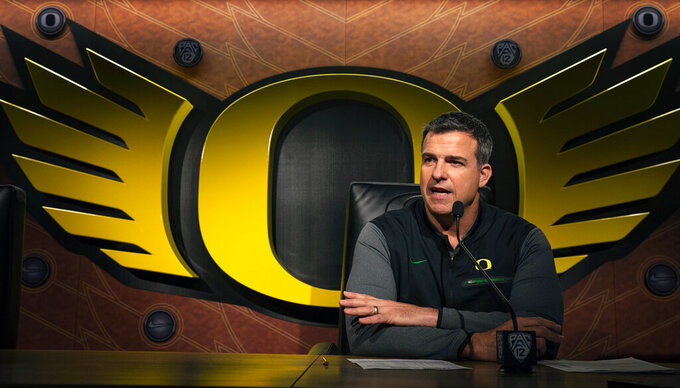 The major ranking services all had Oregon's class in the top 10 nationally, which also put the Ducks atop the Pac-12 Conference.

Oregon got commitments from 21 prospects when the early signing period opened in December. Among them was five-star defensive end Kayvon Thibodeaux, who was ESPN's top overall prospect and the highest-ranked signee ever for the school.

The Ducks added three more recruits Wednesday, including defensive tackle Kristian Williams, a four-star prospect out of Memphis, Tennessee, who announced on Twitter last weekend that he had decommitted from Minnesota.

"You think that a second signing day is a little anticlimactic, but it's not. It ended up being a really good start to the day. We were able to land the exact prospect we wanted at the exact position that we needed. So for us it's been an extremely exciting and satisfying morning with the addition of Jamal Hill, DJ James and Kristian Williams," coach Mario Cristobal said.

The Ducks went 9-4 last season in Cristobal's first year. The team got a boost heading into the upcoming season when quarterback Justin Herbert decided to stay in Eugene for his senior year. One of the prospects that Oregon signed in December was Herbert's little brother, tight end Patrick Herbert.

Other things of note across the Pac-12 for Wednesday's signing day.

GETTING DEFENSIVE: Washington capped its recruiting class by landing two of the top defensive players on the West Coast. The Huskies signed safety Asa Turner out of Carlsbad, California, and linebacker Daniel Heimuli from East Palo Alto, California.

Landing Turner capped a lengthy recruiting battle. Turner was expected to commit in December, but decided not to sign then as he considered an offer to play linebacker for Notre Dame. Washington viewed Turner as a defensive back and that ultimately was a deciding factor.

"In our mind it was pretty clear cut," Washington coach Chris Petersen said of Turner as a safety.

Washington had seemed to be the favorite for Heimuli for most of the recruiting period, but his Menlo-Atherton team advancing to the state title game in California impacted his ability to make a decision in time for the December signing period.

OH, BROTHER: One highly skilled Shenault at wide receiver is tough enough. Two is quite a handful.

La'Vontae Shenault announced his intention to follow his big brother to Colorado.

Last season, Laviska Shenault Jr. caught 86 passes for 1,011 yards and six TDs for the Buffaloes despite missing time with a toe injury. He was a first-team All-Pac-12 selection and was named the team's MVP.

Like his big brother, La'Vontae Shenault is 6-foot-2 and played at DeSoto High School in Texas. La'Vontae amassed 135 catches for 1,717 yards and 12 TDs over the last two seasons for DeSoto.

LOST ONE BUT GAINED ANOTHER: Southern California added elite receiver Kyle Ford to its recruiting class.

Ford, an Orange County product, had his senior season of high school cut short by a knee injury. He favored the Trojans early in the recruiting process, but Oregon, Washington, Colorado and Michigan pursued him as well.

The abrupt departure of new offensive coordinator Kliff Kingsbury after 34 days shook up the Trojans' recruiting class and led to the departure of receiver commit Bru McCoy, who spurned USC for Texas.

But Kingsbury's departure and Graham Harrell's arrival didn't sway Ford, who is likely to be the top-rated recruit in USC's class.

FORGING A NEW PATH: Charles Njoku decided not to follow his two older brothers to the University of Miami. Instead, he is headed west.

The 6-foot-4, 210-pound wide receiver from Wayne, New Jersey, signed with UCLA on Wednesday. He is the younger brother of Cleveland Browns tight end David Njoku, who was a first-round selection in 2017, and Evidence Njoku, who is at the University of Miami.

Charles Njoku is a four-star prospect, according to Rivals.com. He caught 52 passes for 1,106 yards and 16 touchdowns last year.

SNOW DAY: An intense winter storm that dumped up to a foot of snow on parts of Salt Lake City forced Utah coach Kyle Whittingham to cancel his signing day news conference.

The day had an international flavor with the Utes bringing in 6-foot-7 offensive lineman Bamidele Olaseni, a native of London who played last year for Garden City Community College in Kansas, and fellow 6-foot-7 offensive lineman Luke Felix-Fualalo, a former rugby player in Australia who played last year for prep powerhouse Mater Dei in California.