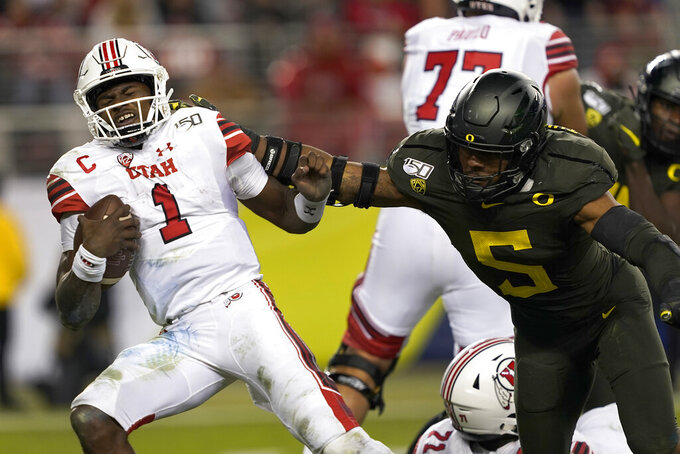 But Thibodeaux, the explosive 6-foot-5, 242-pound freshman, represents the potential of Oregon’s recruiting efforts in and around Los Angeles in a way that goes beyond the surprise signing of Thomas in 2011.

Oregon’s return to the Rose Bowl comes after the addition of three recruiting classes ranked in the top 20 nationally since Mario Cristobal became head coach in Dec. 2017, all of which have leaned heavily on California. Including members of the 2020 class that have already signed letters of intent, 27 of the 69 players Oregon has added in that span have come from the Golden State.

Focusing in on Southern California, Cristobal and his staff have landed players from historic powerhouses in the City Section, Long Beach and Orange County as well as from emerging programs in the Inland Empire and Conejo Valley. Those players are a key reason why Oregon won the Pac-12 and will play in the Rose Bowl for the first time since the 2014 season.

“Oh man, it’s crazy,” said Ducks running back CJ Verdell, who is from the San Diego suburb of Chula Vista. “As many Cali boys as we can get.”

Cristobal has brought a relentlessness to recruiting honed by four seasons as an assistant for Nick Saban at Alabama. It helped that Cristobal’s efforts came at the same time as when USC and UCLA have struggled.

Coincidentally, it was Bruins coach Chip Kelly who landed Thomas when he was in charge of Oregon, and since then, it's been harder for Los Angeles’ flagship college programs to recruit top local players. Ducks cornerback Thomas Graham Jr., who is from Rancho Cucamonga, said players have the same affection for Thomas now that Reggie Bush held at the start of the decade when the Trojans were reliably signing the Pac-12’s best classes.

“I don’t think Reggie Bush is ever going to be passed by anybody just for what he did at USC, but the most recent history, De’Anthony is really that guy definitely, because I got witness a lot of the stuff face to face,” Graham said.

One of the most memorable performances for Thomas was his 155 yards rushing when Oregon defeated Wisconsin in the 2012 Rose Bowl.

“Two carries, two touchdowns,” Graham said. “He just did everything. I remember his kickoff return, I seen it in person when he returned it at SC. I turned on Oregon games just to watch De’Anthony, and that’s what made me become an Oregon fan."

Oregon has been able to use the combination of nostalgia and unyielding efforts to dominate in Los Angeles, with the addition of the No. 1 player nationally in the 2019 recruiting class in Thibodeaux representing both a breakthrough and statement of intent.

Thibodeaux has lived up to the billing, leading Oregon with 14 tackles for loss and nine sacks. He was named the Pac-12 freshman of the year on defense, received numerous freshman All-America honors, and teammates believe it is just the start for him.

“Man, his speed is unmatched,” Verdell said. “He got that first step off the ball. He’s really quick, really quick, and he’s getting into it. He’s only gonna get better.”

Thibodeaux hopes to have the same kind of impact on the Rose Bowl that Thomas did. But what is the defensive equivalent of 91- and 64-yard touchdown runs?

“I know the Rose Bowl record is three sacks, so, God willing, I’ll try to break it,” Thibodeaux said.

Oregon will add another top recruit next season in Upland linebacker Justin Flowe. Graham was heavily involved in recruiting Flowe, the No. 1 player in California and No. 4 player in the nation.

“When he decided to come up, we was all jumping,” Graham said.

With the talent pipeline from Los Angeles to Eugene, the Ducks seem poised for continued success in seasons to come.

“This is the hotbed of talent, and they did a really good job,” said linebacker Troy Dye, who is from Norco. “And I’m super excited for the future moving forward because I know there’s a lot of good pieces coming in.”