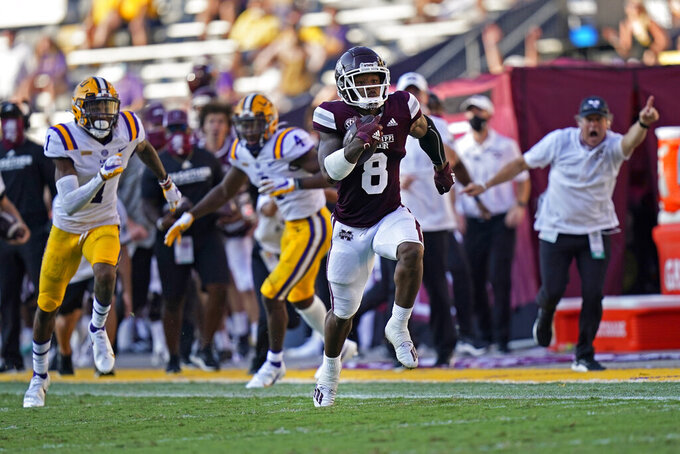 Stingley, who also returns punts and is widely considered one of the top players in all of college football, missed LSU's season opening, 44-34 loss to Mississippi State last Saturday after being hospitalized with a sudden and acute illness Friday night. LSU officials have not provided specifics about Stingley's diagnosis but have stressed that his illness was not COVID-19.

LSU had to start a true freshman and a sophomore who was projected to open the season in a reserve role at cornerback and allowed Bulldogs quarterback K.J. Costello to pass for an SEC record 632 yards, including five touchdown strikes.

“Having Derek not there really hurt us, obviously but I’m glad that he’s healthy," Orgeron said Monday. "Obviously, he makes a difference on our team. We need that. It’s a position of need. We’re very short there, but we’re always going to put his health first.

Stingley, who also returns punts, started all 15 games for LSU’s 2019 national championship squad as a freshman and led the Southeastern Conference with six interceptions, which ranked fifth nationally.

Orgeron also noted that defensive lineman Glen Logan, who was benched for unspecified reasons on Saturday, also will miss the Vanderbilt game, but is expected to be available when LSU hosts Missouri on Oct. 10.

LSU dropped from No. 6 to No. 20 in the AP Top 25 Poll following the Tigers' season-opening loss.

After reviewing video of the game, Orgeron said the Tigers in fact did many things well, forcing four turnovers on two interceptions and two fumbles, scoring a touchdown on defense and getting five sacks.

But the coach said that was not enough to compensate for break downs in pass coverage that allowed the Bulldogs to finish with 383 yards after the catch.

“He was the first guy to come see me in my dressing room," Orgeron said of Pelini, who also was defensive coordinator on LSU's 2007 national championship team before taking the head coaching job at Nebraska. "He’s been fantastic today. He’s eager. He’s an outstanding coach. He’s hurting just like everybody else.”

LSU finished plus-two in turnovers and new quarterback Myles Brennan was able to complete several deep passes while throwing for 345 yards and three touchdowns. But he was sacked seven times.

Orgeron said he was pleased with aspects of Brennan's play but added that his new starter needs to get comfortable avoiding the pass rush by stepping up in the pocket and unloading the ball more quickly and decisively when receivers first appear open. Orgeron also said LSU's offensive line, which has four new starters, has to block better so Brennan can get in rhythm.

“The one thing I want our team to understand, and I told them in the locker room, ‘When you win, I give you the credit. When we don’t win, I take (the blame), but it's my job to fix it,'” Orgeron said. “And I guarantee you, this week, we're going to start fixing it.”