OU looks to build on Texas win, rejoin poll in visit to TCU 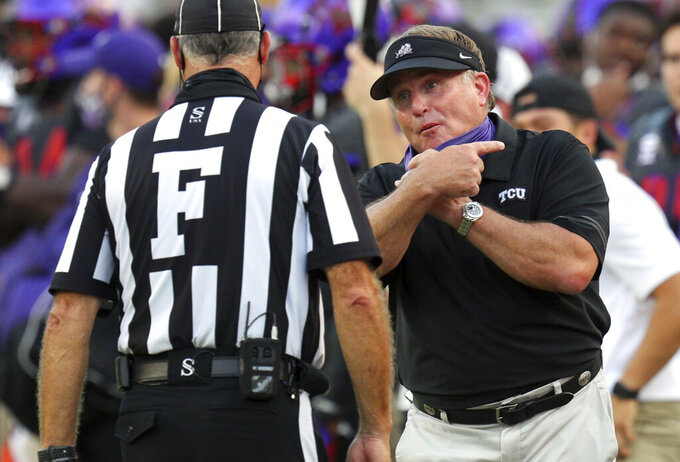 FORT WORTH, Texas (AP) — The last time Oklahoma was unranked for more than a month, Bob Stoops had just started rebuilding a perennial contender he eventually handed to Lincoln Riley, who led the Sooners to the playoff each of his first three seasons.

Riley's team should be in position to return to the Top 25 with a win at TCU on Saturday, two weeks after OU beat rival Texas to answer consecutive regular-season losses for the first time since the 1999 coaching debut of Stoops.

Oklahoma (2-2, 1-2 Big 12) was last ranked this season entering October, before a loss at Iowa State following a defeat at home to Kansas State finished a two-week plummet from No. 3 to out of the poll.

The Sooners are second among the unranked teams as they prepare to visit the Horned Frogs (1-2, 1-2), and Riley believes his team is finally finding a rhythm in the pandemic-altered season.

“We’ve all said a million times, no spring, half the offseason and missing so many guys back and forth during fall camp, the preparation for the season was so uneven,” Riley said. “We’ve been able to have a larger percentage of our team available just to practice and get better. That’s been huge.”

Freshman quarterback Spencer Rattler bounced back from a first-half benching against the Longhorns to have a hand in all three touchdowns, and a 2-point conversion, in overtime of a 53-45 triple-OT victory.

Still, Rattler leads the Big 12 with five interceptions, including two that ended last-gasp hopes against the Cyclones and Wildcats.

“Playing these last four games has definitely helped me grow, especially with those road games,” said Rattler, who still leads the conference in passing efficiency despite the turnovers. “Things are starting to slow down for sure.”

The Horned Frogs, whose only nonconference game against crosstown rival SMU was called off because of COVID-19 concerns, couldn't build on the momentum of a 33-31 win at then-No. 9 Texas. TCU lost to Kansas State 21-14 two weeks ago.

Both of TCU's losses are at home — to the same teams that beat Oklahoma.

“You could feel the energy we had when we went down to Austin,” coach Gary Patterson said. “I felt like both the Iowa State game and the Kansas State, we didn’t come out with a lot of energy at home.”

While TCU's pass defense is solidly in the middle of the Big 12 in yards allowed, the Horned Frogs are tied for last in sacks. That's somewhat unusual for a defense under Patterson, who consistently has produced some of the best defenses in the country in two decades leading TCU.

“People throw the ball differently when you get more of a pass rush with a three- or four-man rush without blitzing,” Patterson said. “I'm not happy with it. It’s something we want to be a lot better at, but I’m not unsatisfied."

The Sooners have played three straight one-score games, going 1-2 while having shaky fourth quarters in all three before getting past Texas in overtime. All three of TCU's games have been decided by seven points or fewer, with the same record.

After TCU joined the Big 12 in 2012, the first three games against Oklahoma in Fort Worth were decided by a touchdown or less before the Sooners won 52-27 two years ago.

“I've played in a lot of close games around here in my career,” OU junior offensive lineman Creed Humphrey said. “I think we took a lot of steps with that in the Texas game because we stayed mentally focused throughout all those overtimes.”

Oklahoma has ranked in the top three nationally in total offense each of the past four years under Riley, including three straight years averaging more than 550 yards per game. But even without Big Ten and Pac-12 teams playing, the Sooners are down to 10th at 502 yards per game this year.

TCU is the only team in the country to lead its conference in total defense the past three years. The Horned Frogs have some work to do to make it four. TCU is sixth in the 10-team Big 12, allowing 367 yards per game. That's 127 more yards per game than league-leading West Virginia.