Outsider Day embraces intensity and mystique of ‘The Game’ 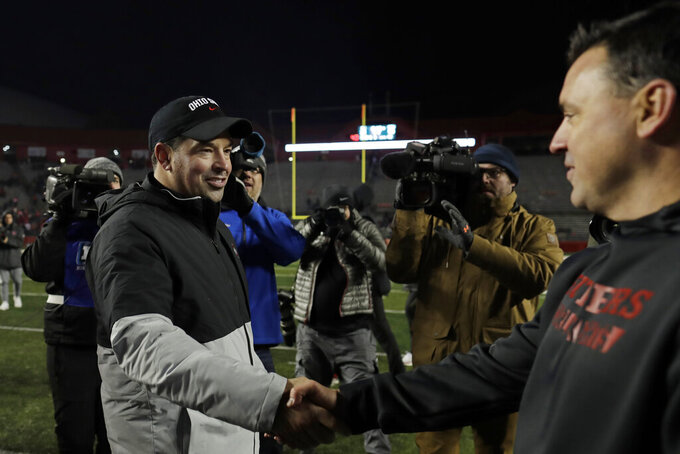 COLUMBUS, Ohio (AP) — Growing up in New Hampshire, Ryan Day was far more concerned with Red Sox-Yankees and how the Celtics were doing against the Lakers than Ohio State’s annual clash with Michigan.

In college two decades ago, when he was the quarterback at New Hampshire, the major rivalry in his world was the Wildcats’ November tilt with Maine to determine who would take home the Brice-Cowell Musket.

Then Day got the chance to work for Urban Meyer, an Ohio native who grew up riveted to the Buckeyes-Wolverines rivalry and embracing the stone-cold hatred layered on it by Woody Hayes and Bo Schembechler during what has been romanticized as the “Ten Year War.” By the time Day got the top job at Ohio State after two years as assistant under Meyer, the do-or-die importance of beating Michigan was ingrained.

“Nothing matters if we don’t win the game,” said the 40-year-old Day, who leads No. 2 Ohio State against the 10th-ranked Wolverines on Saturday at Ann Arbor. “That’s the only way I look at it. We’ve got to win the game.”

If there are any doubts about how serious the rivalry is in Ohio, consider that a Twitter poll this week showed that 41% of more than 2,500 Ohio State fans responding said they’d rather win the Michigan game than the national championship in a one-or-the-other situation.

Day gets that. And it’s pounded into the players in different ways throughout the season, including clocks around the Woody Hayes Athletic Center counting down to the game and a board that tracks the status of Michigan’s recruiting efforts.

“I just know the Ohio State football team means everything to the people of Ohio,” Day said. “It runs deep in their blood. It’s who they are, it’s their identity, their pride. To be the head coach of the football team, that’s an unbelievable responsibility.”

When Meyer arrived prior to 2012 season, he resurrected the Hayes policy of never speaking the name Michigan, referring to the school instead as the team “up north.” He retired with a perfect 7-0 record in “The Game.”

Offensive lineman Wyatt Davis learned the hard way. The sophomore from Bellflower, California, didn’t know much about the rivalry but made the mistake of wearing a blue shirt when he visited the football center on his recruiting trip, a strict no-no under Meyer. Someone quickly got him a jacket to cover it up, but word got to the head coach.

“He's like, ‘Don't ever do that again,’” Davis laughed. “But now that made me realize that this is real. This is, you know, it's very historic, and we take that very serious around here.”

So how much blue clothing does he still have?

Shea Patterson grew up in Toledo, an hour’s drive from Ann Arbor, as an enthusiastic Michigan fan. He transferred to the school after two years at Ole Miss and now finds himself in a position to alter his legacy and that of his coach, Jim Harbaugh, who hasn’t beaten Ohio State in his first four tries.

“The Game” was such a part of Patterson’s childhood that his father, Sean, used to tell him bedtime stories that always included him playing quarterback for the maize and blue.

“There's a lot of Ohio State fans in that area,” he said. “But I just remember growing up, watching ‘The Game,’ always being around the rivalry. I was always one of the kids at school during that rivalry week to wear a Michigan shirt.”

The Wolverines are an underdog again Saturday, but Harbaugh doesn’t have to worry about job security if he slips to 0-5 in “The Game.”

Day, meanwhile, feels the pressure to win the first one and every one after that.

“It’s no secret that part of your evaluation as the head coach at Ohio State is how you do in this game,” Day said. “When you take this job, you understand it. You can win them all, not win this game, feel like it’s a disappointment. I get that, embrace it. That’s why we’re working so hard this week.”