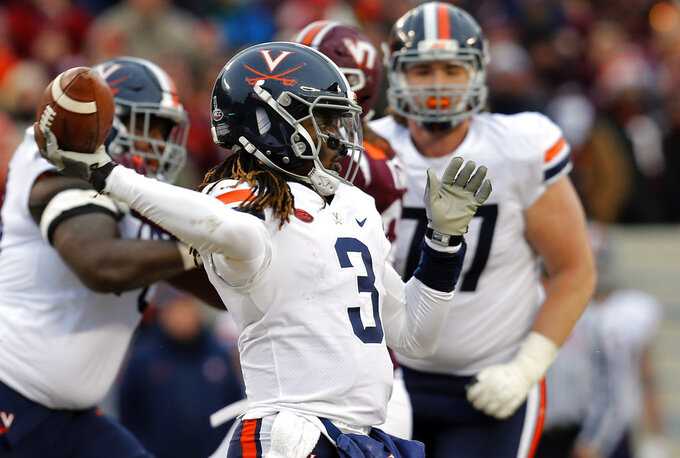 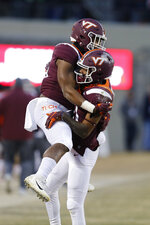 BLACKSBURG, Va. (AP) — It was a crazy finish that only started with a Hail Mary.

Brian Johnson kicked a 42-yard field goal in overtime and Virginia Tech pulled out the wildest victory in its 100 meetings with Virginia, 34-31 on Friday night. The Hokies won their 15th in a row in the series and kept alive their hopes for a 26th consecutive bowl appearance.

"The whole game started with Dalton's catch," said defensive end Ricky Walker, speaking of a throw deep downfield that Dalton Keene took away from Virginia cornerback Bryce Hall. "From there on it was 'I can't believe this is happening' and guys making plays, and that fumble was pretty wild."

The fumble came two plays after Keene's catch had moved the ball to Virginia's 30, and it came at the end of a 19-yard run by Steven Peoples. Joey Blount stripped him of the ball at the goal line, but it squirted into the end zone, through the hands of Virginia's Brenton Nelson and Hezekiah Grimsley recovered for the Hokies. Johnson's extra point tied it at 31 with 1:51 left, and his field goal sent the Cavaliers to their second straight overtime loss.

"We were not in desperation mode on Keene's catch, but it was getting there quickly," Hokies coach Justin Fuente said.

Overtime almost offered disaster when, on third-and-10, Ryan Willis was pressured by Charles Snowden, who grabbed his jersey well behind the line of scrimmage. Had Willis been sacked on the play, the Hokies would have faced fourth and very long with no chance of even attempting a field goal.

Instead, Willis fought to stay upright and threw the ball away.

Virginia Tech (5-6, 4-4 Atlantic Coast Conference) won it when the Cavaliers botched a handoff from Bryce Perkins to Jordan Ellis at the Hokies' 14 and Emmanual Belmar recovered, setting off a wild celebration. The Hokies' signature "Enter Sandman" entrance song rang out through Lane Stadium with fans who braved sub-zero wild chills from the start, singing along and enjoying the most unlikely victory by either team in the 100th installment of the rivalry.

For most of the second half, it looks like the outcome would be different.

The Cavaliers (7-5, 4-4) trailed 14-0 at halftime, but scored touchdowns on their first four possessions of the second half. They went ahead with 6:51 to play when Perkins hit Hasise Dubois for 29 yards, his third touchdown pass of the half. A 28-yard field goal by Brian Delaney made it 31-24 with 2:41 left, but also represented a failure for the Cavaliers, who already had momentum when Snowden tipped a pass and made a diving interception at the Hokies' 11.

But three plays yielded only a yard.

"I was really hopeful for a touchdown there, but I felt a field goal would be enough," Virginia coach Bronco Mendenhall said.

But the Hokies weren't finished and snapped a four-game losing streak at home.

"Heartbroken, honestly," Dubois said. "We had that game in our hands and we let it slip away."

Ellis tried to comfort Perkins, who also fumbled the ball away at the Hokies' 12 in the second quarter.

"It wasn't his fault. We had plenty more chances to win the game. That one play doesn't define the whole game," he said.

The end of the first half featured gamesmanship on both sides after Virginia Tech scored on a blocked punt return.

The Cavaliers took over at their 29 and Virginia Tech burned its timeouts as the Cavaliers went three-and-out and punted with 1:22 left.

The Hokies ran three running plays and Virginia used its two remaining timeouts. Facing fourth-and-1, the Hokies punted and Chuck Davis, attempting a fair catch, muffed it and Rashard Ashby recovered for the Hokies with eight seconds left, giving Virginia Tech a chance to try for another score.

Willis threw toward Grimsley, but Tim Harris intercepted for Virginia and was racing down the sideline until he was tackled at the 10 by Willis.

Willis finished just 14 of 33 for 199 yards with two interceptions and one touchdown, but also ran for 41 yards on 11 carries.

Perkins started the second half with seven straight completions for 206 yards and was 14 for 29 for 259 yards. He also ran for 112 yards.

Turner had the touchdown catch among four receptions for 69 yards and also had a 43-yard run.

Joe Reed caught two touchdown passes, one a one-handed grab on a 29-yard throw and the other a 75-yarder on a pass just five yards downfield.

Virginia: The Cavaliers are going bowling, but without having accomplished their primary goal for the season: beating Virginia Tech.

Virginia Tech: The Hokies will have to muster up another season-saving performance after a very emotional game in eight days' time.

Virginia: The Cavaliers will await their bowl destination.