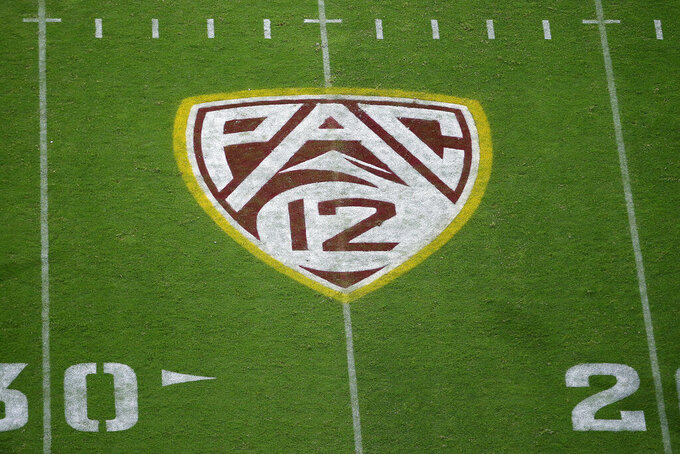 FILE - In this Aug. 29, 2019, file photo, the Pac-12 logo is displayed on the field at Sun Devil Stadium during an NCAA college football game between Arizona State and Kent State in Tempe, Ariz. As the wealthiest conferences like the Pac-12 lay out plans they hope will protect athletes from contracting and spreading COVID-19, most of the schools in the second-tier of Division I football have given up on trying to play in the fall. (AP Photo/Ralph Freso, File)

The Pac-12 took a significant step toward joining the Big Ten in playing football in the fall, getting clearance to hold full-fledged practices from the states of California and Oregon.

Early Wednesday, the Big Ten grabbed headlines by changing course and agreeing to set an an eight-game football schedule that would start the weekend of Oct. 24.

The Pac-12 also has econsidered starting its football season this fall, but it has more hurdles to clear. Half of its schools have been unable to ramp up preparation for the season because of restrictions put in place by state and local authorities to mitigate the spread of COVID-19.

Later Wednesday, the Pac-12 Commissioner Larry Scott announced a breakthrough with the California and Oregon governors that was helped along by the conference's plans to soon begin testing athletes daily for the virus.

“The Pac-12 welcomes today’s statements by Governor Newsom of California and Governor Brown of Oregon that state public health officials will allow for contact practice and return to competition, and that there are no state restrictions on our ability to play sports in light of our adherence to strict health and safety protocols and stringent testing requirements, including our recently announced partnership with Quidel which will enable daily rapid results testing,” Scott said.

He added: “Our California and Oregon universities will now each individually and immediately reach out to their relevant county public health officials to seek clarification on what is required to achieve the same clearance to resume contact practice and competition.”

Earlier this month, the Pac-12 announced a partnership that would give the conference’s schools the capacity to perform daily, rapid COVID-19 tests on athletes. Scott has called the testing a “game-changer” and it certainly proved to be so in the Big Ten. That league's university presidents unanimously voted to return to competition in all fall sports and said their schools will begin daily antigen testing on Sept. 30.

The Pac-12 CEO Group is scheduled to meet Friday to discuss the conference’s options. Because of the restrictions, it might take the teams that had been limited, including conference favorites Oregon and Southern California, more than a month to be ready to play. An Oct. 24 start, lined up with the Big Ten, could be challenging.

California Gov. Gavin Newsom and Scott spoke Wednesday. While there was some confusion about how the state's rule limiting athletic activities to groups of no more than 12 could allow for football practice, ultimately things landed in a good place for the conference.

Oregon Gov. Kate Brown's spokesman said the two Pac-12 schools in that state met with the the Oregon Health Authority on Wednesday to discuss COVID-19 heath and safety plans for football and ask for a exemption to current sports guidance. An exemption has already be given to Oregon professional sports teams.

“We have granted that request, and, under the new guidance, OHA must receive written plans for approval,” Charles Boyle said in a statement.

Boyle said no plans had been received yet from the Pac-12.

“We want Oregon and Oregon State players to be able to focus on football while protecting their health and safety,” Boyle said. “We also want to ensure that team practices will not be derailed by a COVID-19 outbreak that would threaten the health not only of the players and coaches, but of their university communities and the wide communities of Eugene and Corvallis.”

The Big Ten and Pac-12 decided Aug. 11 to postpone all fall sports until January due to concerns about the coronavirus pandemic.

Football in the Atlantic Coast Conference and the Big 12 started last week, with the Southeastern Conference set to kick off its season on Sept. 26.

President Donald Trump pushed for the Big Ten to get back to football and had a similar sentiment for the Pac-12.