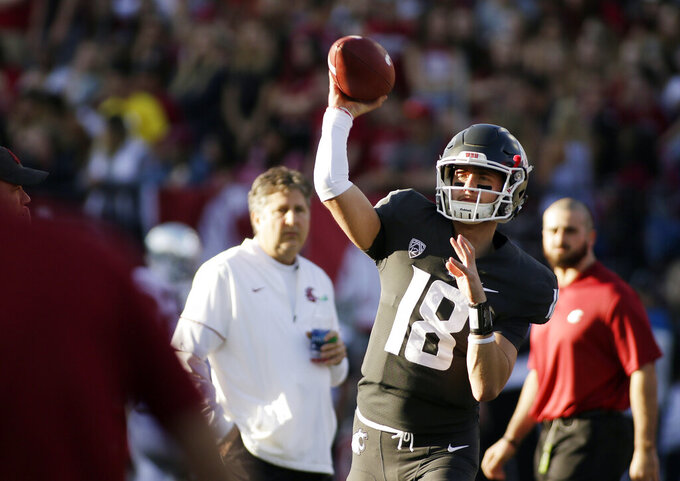 And yes, if that last name sounds familiar, it's because John is the son of Drew Bledsoe, the former Washington State quarterback who went on to have a storied NFL career. In the spring game last weekend, Bledsoe threw a 16-yard touchdown pass for the Crimson team, which went on to prevail 25-24 in overtime.

Gordon and Tinsley got the bulk of the reps, however, with Gordon throwing for 234 yards and three TDs for the Gray side, and Tinsley passing for 155 yards and a Crimson score. Gage Gubrud, a prolific graduate transfer from Eastern Washington, did not participate in the game because of a foot or ankle injury that has limited him throughout spring camp.

"Things felt smooth," Gordon told reporters about his outing. "It's a spring game, they weren't blitzing much. So it's easy to hold on to the ball for a while."

The quarterback who eventually wins the nod will have some big shoes to fill. Minshew, who was among the Cougars' former players at Saturday's spring game, led Washington State to a school-record 11 wins in his lone season.

He led the nation in passing yards per game (367.6) while also finishing in the top five with 38 touchdowns and a 70.7% completion rate. His 4,779 passing yards set a Pac-12 Conference record.

The Cougars were ranked No. 10 in the final AP Top 25 after a 28-26 victory over Iowa State in the Alamo Bowl.

Coach Mike Leach had a mixed assessment of the team following the spring game. The Cougars wrapped up camp Tuesday.

"The guys that played well let it rip and ran to the ball," he said. "And the guys that didn't — you can call it stage fright, or anxiety or just tentative — we've got to get rid of that stuff."

Asked how to get rid of it, Leach replied: "Show it on film and raise hell from here on out as it happens."

There was a lot of focus this spring on the QBs — as there always is — across the Pac-12:

HERBERT'S BACK: One team that doesn't have a quarterback issue is Oregon, which has Justin Herbert back for his senior season. Some had thought Herbert might leap to the NFL early, but he announced before Oregon's Redbox Bowl victory over Michigan State that he'd return.

The biggest revelation out of Oregon's spring game was the development of presumed backup Tyler Shough, who completed 18 of 31 passes for 178 yards and a score.

"It just kind of clicked at the end of the season," coach Mario Cristobal said about the redshirt freshman's emergence. "There has been tremendous growth there. We are confident in him going into the season."

COSTELLO'S STAYING, TOO: Stanford quarterback K.J. Costello also is returning for his senior year, and the Cardinal can use him. The team embarks on 2019 without many of its leaders from last year, including running back Bryce Love, wide receiver JJ Arcega-Whiteside and tight end Kaden Smith.

Two weeks ago, Costello played in his first-ever spring game, going 8-for-15 for 85 yards. He missed prior spring games because of injury. Costello threw for 3,540 yards and 29 touchdowns last year.

"There's no replacement for experience, and the experience he gained last year was phenomenal, and he had the possibility to join the draft and go to the NFL," Stanford coach David Shaw said. "But I think he knew in his heart, too, there are things he can work on, things he can improve. It's not just about being drafted, it's about being you best self when you take that next step."

SO IS LUTON: Oregon State quarterback Jake Luton won a sixth season of eligibility, so he's expected to be the starter for Oregon State going into the fall — at least for now. Luton passed for a team-high 1,660 yards and 10 touchdowns last season but his career has been marred by injury.

He'll have competition from sophomore Tristan Gebbia, a transfer from Nebraska who was the Beavers' scout team quarterback last season.

The Beavers finished 2-10 overall and 1-8 in the Pac-12 in former quarterback Jonathan Smith's first year as coach.

GOING EARLY: Some schools, like Oregon, have more traditional games for fans to cap spring camp, but some schools prefer to keep it low-key. Arizona State held its spring game back on Feb. 28, while California went on March 16. USC's game was on April 6 and drew some 2,000 spectators.

Utah held its spring game two weeks ago, marking the occasion by announcing a $17.5 million pledge by the Ken Garff family to renovate and expand Rice-Eccles Stadium.

WASHINGTON GOES LATE: The Huskies, who won the Pac-12 title last season with a 10-3 victory over Utah in the conference championship before falling 28-23 to Ohio State in the Rose Bowl, will hold their spring game Saturday. Colorado will, too, under new coach Mel Tucker.