Pass first Pitt? Panthers believe the big play is back 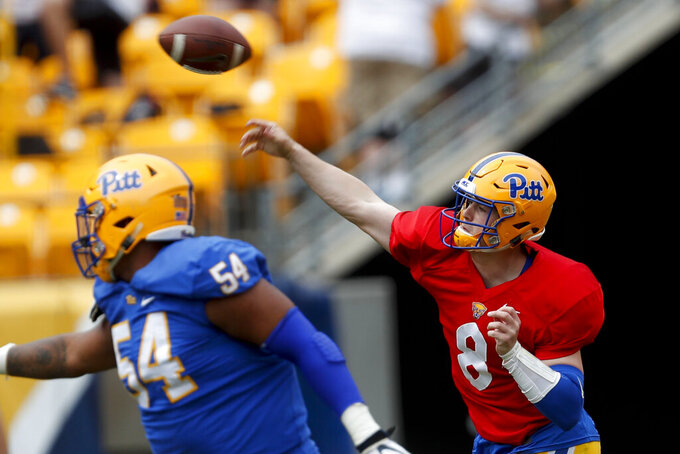 PITTSBURGH (AP) — Pittsburgh quarterback Kenny Pickett took the snap, looked to his right and heaved the ball toward the corner of the end zone. When wide receiver Tre Tipton outwrestled a teammate for a 22-yard touchdown, Pickett and Tipton reunited at the goal line and celebrated with an intricate and deftly executed handshake, complete with a shimmy at the end.

The 22-yard connection — the second of two touchdowns passes from Pickett to Tipton — during the Blue/Gold scrimmage on Saturday served as the exclamation point of a spring the Panthers believe signaled a positive step forward for a passing game that struggled to make any sort of impact in 2018.

Though Pitt reached the Atlantic Coast Conference championship game for the first time last fall behind a brawny rushing attack, it wasn't enough for Shawn Watson to keep his job as offensive coordinator. Head coach Pat Narduzzi lured Mark Whipple — whose previous stops included Massachusetts, Miami and the NFL's Pittsburgh Steelers — out of semi-retirement and tasked him with bringing balance to an offense that finished next to last in the 14-team ACC in yards passing per game.

The early returns looked promising. Pickett ended six weeks of drills by completing 10 of 14 passes for 125 yards and the two scores to Tipton. Backup quarterbacks Jeff George Jr. and freshman Davis Beville also got the ball down the field. Seven players had at least one catch of 20 yards or more, encouraging for a group that topped over 200 yards passing just once in 2018.

"It shows everyone what we've been working (on)," Pickett said. "We're not just talking nonsense. What we said. It's real. The offense has explosiveness in the passing game and that's going to continue."

If Pitt wants to have any shot at becoming the rare repeat champion on the wide-open Coastal Division, the Panthers don't really have a choice. While Whipple and Narduzzi cautioned it's unwise to read too much into a glorified scrimmage, the ability for Tipton and Taysir Mack to win one-on-one battles — a rarity last fall — and Pickett's improved fundamentals should provide momentum heading into training camp.

"The ball is coming a lot quicker out of his hands and I think that's the most impressive thing we saw," Narduzzi said. "The ball is being thrown on time. Before the receivers are out of their break, the ball is coming. That will make our offensive line better."

Pitt relied heavily on departed running backs Qadree Ollison and Darrin Hall last fall, typically working out of a set that included both a fullback and a tailback, a decidedly old-school approach in a college game that is becoming ever faster. The proof of the new mindset wasn't just in the production but in the way the Panthers went about doing it. They lined up with four wide receivers at times and even got the tight ends — a position that all but vanished in the passing offense last year — involved.

Yet the most important development may be Pickett's renewed confidence. While the junior tried to shrug off the "game manager" label in his first season as a starter, he often looked the part while spending most Saturdays turning and handing the ball off. He's embraced Whipple's decidedly more modern approach, one that Pickett believes allows him more freedom.

"He wants me to have fun and he wants me to go out there and play the game that I know how to play," Pickett said. "I think you saw it today, running around a little bit. Staying in the pocket (too). That's what I got back to this spring, just being myself, having fun with the game and letting it fly."