Patterson back to run Michigan's new-look offense in opener 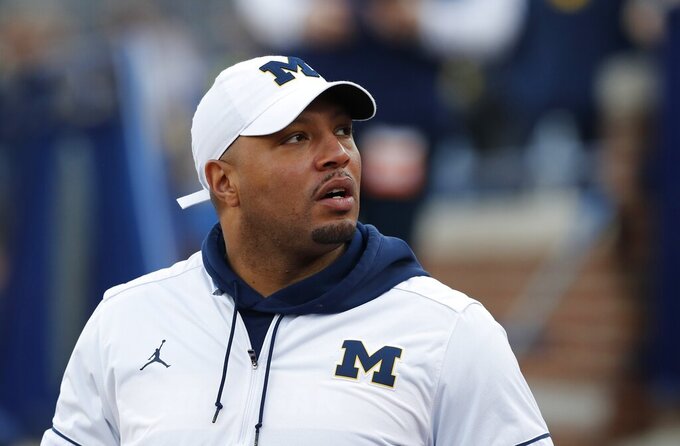 FILE - In this Saturday, April 13, 2019 file photo, Michigan offensive coordinator Josh Gattis during the team's annual spring NCAA college football game in Ann Arbor, Mich. Gattis is perhaps the most intriguing new offensive coordinator in the country as Jim Harbaugh seems to be ceding control in favor of a more modern approach. It’s not as if the Wolverines weren’t running spread elements and run-pass options last season with quarterback Shea Patterson. But bringing in Gattis suggests a more immersive approach.(AP Photo/Carlos Osorio, File)

ANN ARBOR, Mich. (AP) — Shea Patterson is back as Michigan's starting quarterback, directing a new offense that is very familiar to him.

The senior said the no-huddle, hurry-up offense scheme the seventh-ranked Wolverines will unveil Saturday against Middle Tennessee is a lot like the one he ran for two years at Ole Miss.

Jim Harbaugh, coming off his fourth season at Michigan, made a major move in the offseason he is hoping pays off right away. He hired Josh Gattis away from Alabama to be the team's offensive coordinator, giving him control after being involved in the play-calling process in the past.

"We'll study a little what Alabama did, but we'll mostly focus on the players they've got returning at Michigan," Middle Tennessee coach Rick Stockstill said.

The Wolverines are expected to play to their strengths on offense, leaning on Patterson as a dual threat with a heavy dose of run-pass options behind an experienced offensive line with a formidable trio of receivers trying to live up to Gattis' desire to have speed in space.

Harbaugh has made it clear he intends to play redshirt sophomore quarterback Dylan McCaffrey, who played six games last year before a broken collarbone ended his season.

"Would like to definitely play both," Harbaugh said earlier this week.

Later in the same day, Patterson made it clear he would rather get all the snaps he can possibly get in the season-opening game and beyond.

"I want to be out there every single play," he said. "I always want the ball in my hands, but that's up to coach Harbaugh."

Here are some other things to watch at the Big House.

The Blue Raiders won eight games last year and played in a fourth straight bowl game for the first time since joining the top tier of college football in 1999. Extending the streak may be a challenge with a lot of new starters, especially at quarterback.

Middle Tennessee will be breaking in a new quarterback because Brent Stockstill, the coach's son, exhausted his eligibility and is on Lane Kiffin's staff at Florida Atlantic.

Michigan could've potentially had a backfield with Karan Higdon and Chris Evans this season, but both are not with the team. Higdon skipped his senior season to enter the NFL draft and is playing for the Houston Texans. Evans announced in February on Twitter that he was going through academic issues.

Tru Wilson, a former walk-on, is expected to start after averaging nearly 6 yards per carry on 62 rushing attempts last season. He will likely rotate with Christian Turner, who ran for 99 yards over three games last season, and highly touted freshman Zach Charbonnet.

Stockstill was trying to say the right things about his overlooked team, entering his 14th season at the Conference-USA program based in Murfreesboro, Tennessee.

Michigan is one of 14 programs at the highest level of college football to have won at least 10 games three times over the previous four years. Another 10-win season, though, is not what the Wolverines need this season. They're expected to win the Big Ten for the first time since 2004 and to perhaps compete for a national championship that has eluded college football's winningest program since 1997.

"We put in so much work these past six, seven months," Patterson said. "We're just ready to go."