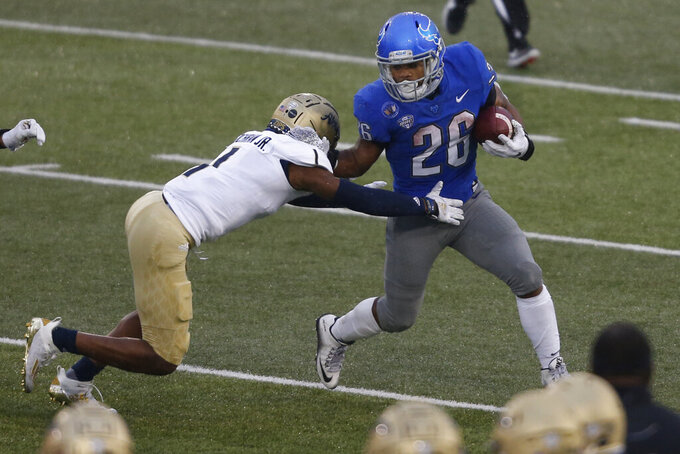 DETROIT (AP) — Jaret Patterson and No. 23 Buffalo have packed a lot of accomplishments into this short season.

Patterson has rushed for over 1,000 yards in just five games, and the Bulls have an undefeated record and a national ranking. Now they have a chance for a feat that could resonate for even longer — a Mid-American Conference title.

“It’s important to me, important to this team," Patterson said this week. "I feel like that’s really the only thing missing.”

Buffalo tries for its first MAC title since 2008 when the Bulls face Ball State on Friday night at Ford Field in Detroit. The roles between these two teams were actually reversed the last time Buffalo won the conference. Twelve years ago, it was Ball State that came in with an unbeaten record and a No. 12 ranking. The Bulls spoiled that undefeated run with a 42-24 win in the title game.

Ball State (5-1) is trying for its first MAC title since 1996, the year before the league championship game began. The biggest obstacle in the Cardinals' path this year is Patterson, whose incredible rushing resume already includes a 301-yard game against Bowling Green and a 409-yard performance against Kent State.

“I know a lot of attention goes to Jaret Patterson and rightfully so. When you have a 400-yard game, a 300-yard game and over 1,000 yards in an abbreviated season, that’s pretty remarkable," said Ball State coach Mike Neu, who played for the Cardinals when they won league titles in 1989 and 1993. "But they’ve got multiple weapons.”

Indeed, Buffalo (5-0) leads the FBS in scoring offense at 51.8 points per game. The Bulls have scored at least 40 points in nine of their last 10 games against MAC opponents.

Buffalo also played in the league title game in 2018, losing to Northern Illinois after a 10-win regular season.

“For the ones that have been there, it’s a sour taste," Buffalo coach Lance Leipold said. "There’s no doubt about it, it’s very disappointing — that game, and the way that season ended.”

Patterson needs 213 yards rushing to pass Branden Oliver for Buffalo’s career lead, and his next rushing touchdown would equal the single-season school record of 19 he set last season when he played 13 games.

“It’s a lot of things that goes into it. I have a tremendously talented offensive line up front, so you’ve got to kind of stop them first before you get to me," Patterson said. “We’ve seen them put eight in the box. That’s not special.”

Ball State has an offensive standout of its own in Justin Hall, who became the school's career leader in receptions recently. He's up to 252.

Every Ball State game except one this season has been decided by seven points or fewer. The Cardinals are 4-1 in those games. Buffalo hasn't had a game closer than 19 points.

With so much focus on Buffalo's running game, quarterback Kyle Vantrease is overshadowed. He's thrown only one interception in 85 attempts this season. Ball State's Drew Plitt is averaging 279 yards passing per game, with 13 touchdowns and five interceptions.

Patterson's brother James is a linebacker for Buffalo and a team captain.

“We talk a lot about Jaret Patterson. One thing that we haven’t really talked much about this year is the play of James Patterson and how well he’s played," Leipold said. "Not only has he played well, he’s moved into the middle linebacker spot. He hadn’t played it in this program, other than maybe repping some as a backup.”

Buffalo's success makes Leipold a potential candidate for some bigger jobs, but he's trying to keep his team focused on this title game.