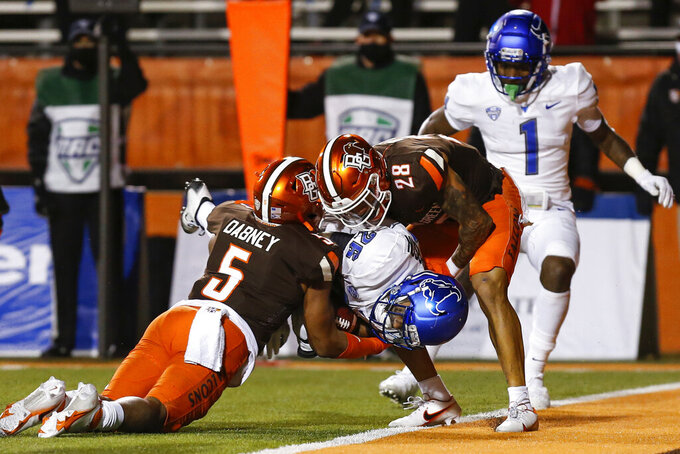 Buffalo running back Jaret Patterson (26) bulls his way into the end zone for a touchdown between Bowling Green defensive backs Sy Dabney (5) and Shon Strickland (28) during the first half of an NCAA college football game in Bowling Green, Ohio, Tuesday, Nov. 17, 2020. (Scott W. Grau/Sentinel-Tribune via AP)

Patterson capped the opening drive of the game with a 17-yard touchdown run, and he added a short scoring run at the end of the first half for a 21-3 lead. He had scoring runs of 15 and 57 yards in the second half. Patterson entered needing 81 yards for third in program history and 118 for second, passing James Starks at 3,140. Branden Oliver holds the record at 4,049.

Kevin Marks Jr. added 90 yards on the ground and one TD for Buffalo (3-0, 3-0 Mid-American Conference), which has outscored its opponents 49-0 in the third quarter this season. Kyle Vantrease completed 7-of-12 passes for 74 yards. Antonio Nunn made the first six receptions for Buffalo.

Last season, Patterson rushed for a school-record 298 yards and a MAC-record six touchdowns against BGSU.

Matt McDonald threw for 219 yards with one interception for Bowling Green (0-3, 0-3). Andrew Clair rushed for 85 yards and freshman Terion Stewart, who ran for two fourth-quarter touchdowns last week, had nine carries for 42 yards and two TDs.