Patterson starting, but more than 1 Michigan QB could play 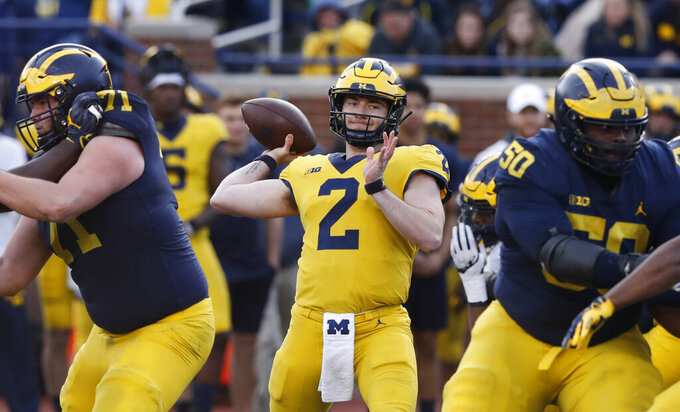 But backup Dylan McCaffrey also seems to be in coach Jim Harbaugh's plans.

"All options are open that way, in terms of that," Harbaugh said Monday. "Would like to definitely play both."

The seventh-ranked Wolverines open the season Saturday night against Middle Tennessee, and this is Patterson's second season with Michigan after transferring from Mississippi. He threw for 2,600 yards and 22 touchdowns last year. McCaffrey played in six games last season and attempted just 15 passes.

So Patterson has the clear edge in terms of game experience, but Harbaugh was asked anyway to confirm that he would in fact be the starter Saturday.

"Yes," he replied. "God willing and the creek don't rise."

Harbaugh was less clear about the running back spot, saying he hasn't decided who his top option is there. Michigan lost Karan Higdon and Chris Evans from last year's team.

The Wolverines will be without offensive lineman Andrew Stueber this season. Harbaugh said he has a torn ACL.

Michigan lost several key contributors on defense, which could put more pressure on the offense. The Wolverines have a new offensive coordinator in Josh Gattis, and Patterson returns along with receivers Donovan Peoples-Jones and Nico Collins.

There may still be an adjustment period for the new-look offense, but the team has a good idea of what to expect from Patterson.

The Wolverines won 10 games in a row last season, but then fell flat in their moment of truth, losing 62-39 at Ohio State. A Peach Bowl matchup with Florida felt anticlimactic, and Michigan played like it, losing 41-15.

Middle Tennessee isn't exactly a marquee opponent, but this is a chance for the Wolverines to move on from the sour taste of those two blowouts.

"We've been ready to play since December 31st, after our game at the Peach Bowl," defensive back Lavert Hill said.

The disappointing ending to 2018 didn't prevent voters from putting Michigan in the preseason top 10, and now the Wolverines are beginning their first game week — although there are still a few more days before they actually take the field for the opener.

"I really feel like we're ready to play," Harbaugh said. "But really happy to have another week of practice, to get everything tighter and better."

NOTES: Harbaugh was asked about the retirement of NFL star Andrew Luck, who played QB for Harbaugh at Stanford. "He's a brother, he's one of my all-time favorite players that I've ever coached, and his wishes aren't to play right now," Harbaugh said. "As far as other people, their reactions, I would say — even though his intentions were very clear and very well spoken — I would say: To not understand a man's purpose, does not make him confused."