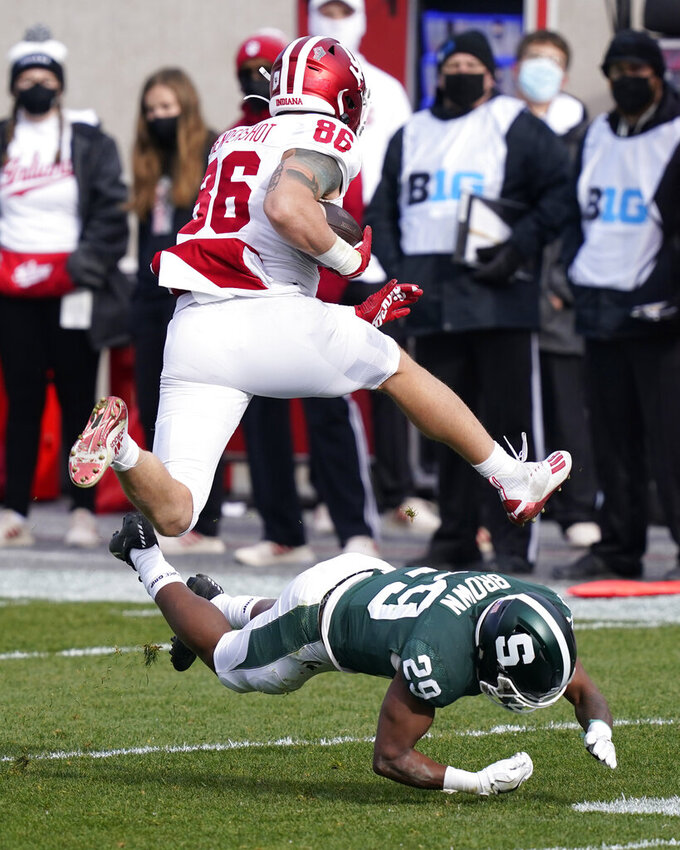 EAST LANSING, Mich. (AP) — For Ty Fryfogle and No. 10 Indiana, each game brings something new to be excited about.

Now, the Hoosiers can look ahead to a showdown next weekend at No. 3 Ohio State.

Penix also threw two interceptions in the first half, but that didn't matter much. The Spartans (1-3, 1-3 Big Ten) were just as sloppy — to the point where quarterback Rocky Lombardi was pulled in the second quarter.

Fryfogle did most of his damage in the first two quarters, when all the game's scoring occurred. Michigan State was shut out at home for the first time since a 31-0 loss to Michigan in 1985.

Indiana has won its first four Big Ten games for the first time since 1987, and the Hoosiers beat Michigan State for the Old Brass Spittoon for only the second time in the last 12 meetings.

“We sat down at the beginning of the year with our leadership council, come up with our goals," Indiana coach Tom Allen said. “One of the major things that guys wanted was, win our trophy games.”

Since beating rival Michigan on Oct. 31, the Spartans have lost their last two games by a combined 73-7.

Michigan State and Indiana combined for five turnovers in the first 18:15, but only the Hoosiers showed any ability to take advantage. They went 50 yards in seven plays after Lombardi's first interception, taking a 7-0 lead on an 8-yard run by Stevie Scott. Then came a messy sequence of plays for the Spartans that put Indiana in control.

A penalty on the kickoff forced Michigan State to start on its own 14, and on the second play of the drive, Anthony Williams fumbled, giving Indiana the ball at the 16. Penix threw a 16-yard touchdown pass to Fryfogle.

Shakur Brown intercepted Penix in the second quarter around the goal line, but Lombardi was picked off on the very next play, setting up an Indiana field goal.

Payton Thorne replaced Lombardi at quarterback and broke free for a 38-yard run on his first play, but that drive stalled.

Indiana went up 24-0 when Penix found Fryfogle up the right sideline for a 65-yard TD.

Indiana: The Hoosiers didn't have a letdown after a big win over Michigan last weekend. They took advantage of Michigan State's early mistakes and led comfortably for the entire second half.

Michigan State: The Spartans have been hurt by turnovers in all three of their losses, and this was no exception. Lombardi isn't the only one to blame, but it was time for Michigan State to try another option at quarterback. Thorne went 10 of 20 for 110 yards with an interception.

“We thought it was some decision making early in the game," Michigan State coach Mel Tucker said. “Payton was the next man up and so we gave him an opportunity. It was as simple as that. We’ll look at the film and we’ll evaluate it more and see what we need to do moving forward.”

Indiana was without offensive linemen Caleb Jones and Mike Katic, and then Allen's son — linebacker Thomas Allen — was carted off during the game with an undisclosed injury.

Michigan State wore helmets with the block “S" on them in honor of former coach George Perles, who died earlier this year at age 85.

Indiana came in with its highest ranking since 1969, and this decisive victory should do little to call that into question.

The Hoosiers travel to play Ohio State next Saturday. The Buckeyes — the only other unbeaten team in the Big Ten East — had this weekend off after their game against Maryland was canceled.

Michigan State is scheduled to play at Maryland next Saturday, but the Terrapins had an elevated number of COVID-19 cases, which caused the cancellation against Ohio State. It's hard to view anyone's schedule with much certainty at this point.