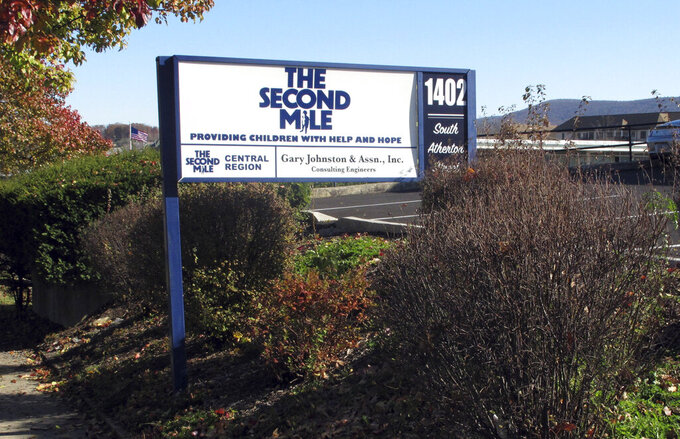 FILE - In this Nov. 2, 2011 file photo a sign for The Second Mile charity is seen outside the organization's headquarters in State College, Pa. Penn State stands to collect hundreds of thousands of dollars from the defunct charity for children founded by Jerry Sandusky to settle claims that were never fleshed out in a civil lawsuit. (AP Photo/Genaro C. Armas)

The university and the state attorney general's office both confirmed this week that an agreement was reached recently.

The university said it also will receive additional payments from entities that ensured The Second Mile, although the terms are confidential.

When Penn State took steps in 2017 to sue The Second Mile it did not spell out why it was going after it and Jack Raykovitz, who was the charity's president when Sandusky was arrested in 2011.

Penn State President Eric Barron, in the Capitol Wednesday, did not explain what motivated the settlement.

The attorney general's office said it will file a final accounting with the Centre County Orphans Court in the next two months to document transferring $733,000 to Penn State.

Neither Raykovitz nor lawyers for him and The Second Mile Inc. returned multiple messages seeking comment over the past two days.

It's not clear which insurer Penn State will collect from. In March 2013, a federal judge in Harrisburg ruled that Federal Insurance Co., which had issued a policy to The Second Mile, did not have to cover Sandusky individually for damages related to child molestation.

A spokeswoman for Federal Insurance parent company Chubb declined to comment, and lawyers who represented Federal in the federal court case did not respond to messages seeking comment.

The money represents a fraction of the costs to Penn State of the Sandusky child sexual abuse scandal, including more than $100 million to settle with those who said they were abused by Sandusky, along with other legal claims, a federal fine, litigation costs and related expenses.

Sandusky founded The Second Mile in 1977 to help at-risk youth, and its board included many prominent business, political and civic leaders. Prosecutors argued Sandusky used the charity as a way to find children he would later abuse, and victims testified at his 2011 trial about their involvement with The Second Mile.

A judge in March 2016 allowed The Second Mile to dissolve after its lawyers said the scandal had dried up fundraising and made it impossible to continue.

At its peak, the charity said it was serving some 100,000 children annually through camps and fundraisers. It maintained a headquarters on a busy commercial street in State College and operated in other parts of Pennsylvania.

Sandusky was retired as Penn State's longtime defensive football coach when he was charged with sexual abuse of children, and was convicted of 45 counts in 2012.

He is serving a 30- to 60-year state prison sentence and last month was granted a new sentencing by an appeals court that said mandatory minimum sentences had been misapplied in his case.