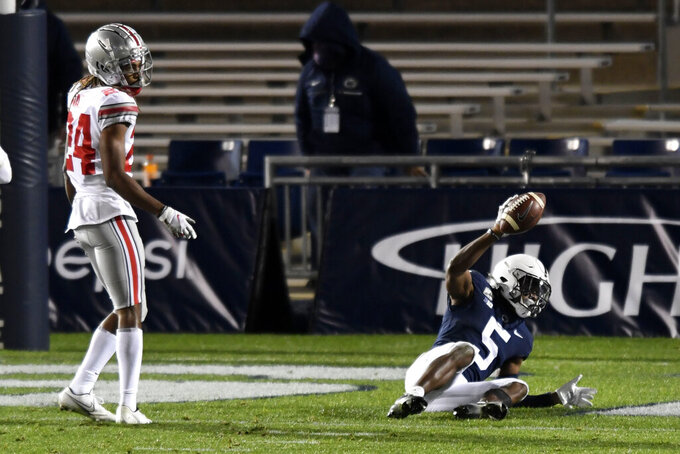 STATE COLLEGE, Pa. (AP) — Penn State and Maryland share a long, one-sided history. The Terrapins would probably like to forget the most recent meetings.

The Nittany Lions have won 40 of 43 games in the series and the last three by a combined score of 163-6. This time, Penn State just wants to avoid an 0-3 start for the first time since 2001 when the teams meet Saturday at Beaver Stadium.

“The last thing you want to do is be predictable against a talented opponent,” Penn State coach James Franklin said.

But that’s what he feels has happened over the first two games where Penn State has struggled to run the ball consistently and hasn’t contained a pair of shifty, playmaking quarterbacks. Now the Nittany Lions will need to deal with Taulia Tagovailoa, who’s coming off one of the best performances by a Maryland quarterback.

Tagovailoa completed 74% of his passes for 394 yards with three touchdowns and an interception in Maryland’s win over Minnesota last week. The Terps still had to claw back from a 17-point deficit in the second half and force overtime.

“I know they’ve had a couple of tough games the last couple of weeks, but I know that they’re a well-coached team and I expect that we’ll get their best, especially at home,” Locksley said.

So far, Penn State players don’t feel like they’ve performed up to their ability. The defense couldn’t get Ohio State’s Justin Fields out of rhythm a week ago and the front seven has been preparing all week to put pressure on Tagovailoa.

“They’re two great quarterbacks who can do it through the air and with their feet,” defensive tackle PJ Mustipher said. “We have to be able to stop them.”

“We actually had things blocked well and had a running lane and a guy would rush up the field, stick his foot in the ground, retrace us and tackle us in the hole for a yard or two gain,” Franklin said.

Mixing in Caziah Holmes and Keyvone Lee to spell starting running back Devyn Ford will be a focus. Neither freshman had a carry against the Buckeyes.

Except for Jahan Dotson, whose eight catches for 144 yards and three touchdowns paced Penn State last week, the Nittany Lions haven’t given much help to quarterback Sean Clifford.

They’re getting healthier at receiver and expect to have Cam Sullivan-Brown and TJ Jones available for the first time this season.

Sullivan-Brown brings a veteran presence to the perimeter and the team believes Jones can be a deep threat. Meanwhile, freshmen Parker Washington and KeAndre Lambert-Smith have both earned starting spots on the depth chart this week.

Maryland’s defense has allowed 87 points in two games, but came through when it counted by holding Minnesota scoreless in the fourth quarter.

That set up the Terps to force overtime.

“We had a lot of guys step up at the end of the game. We knew we had to give our offense a chance,” linebacker Jordan Mosley said.

Maryland yielded 262 yards rushing against Minnesota after giving up 325 to Northwestern.

If the game happens to come down to a last-second kick, both teams stand a good chance.

Maryland’s Joseph Petrino had a 51-yard attempt against Minnesota clang off the upright in the first half, but he drilled a 51-yarder in the fourth quarter and made what turned out to be the game-winning conversion in overtime.

Penn State’s Jordan Stout is primarily the team’s kickoff specialist, but he’s nailed a program-long 57-yarder before and drilled one from 50 yards last week.