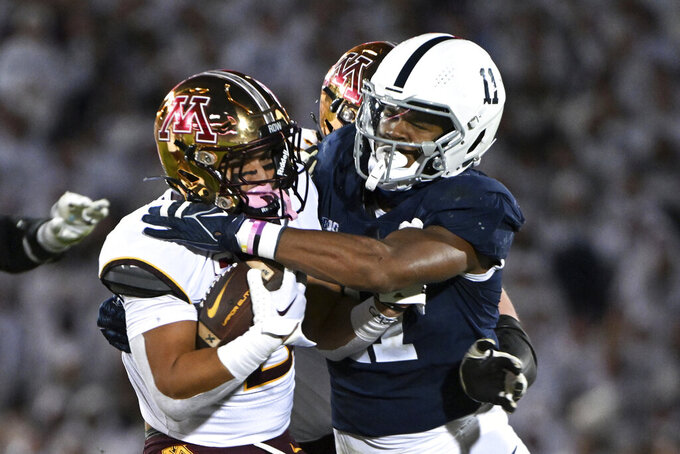 FILE - Penn State linebacker Abdul Carter (11) tackles Minnesota running back Trey Potts (3) in the second half of an NCAA college football game, Saturday, Oct. 22, 2022, in State College, Pa. James Franklin hasn't hesitated to play freshmen in big roles in the past and this season is no different. The Nittany Lions have gotten big contributions from running backs Kaytron Allen and Nick Singleton while hard-hitting linebacker Abdul Carter has emerged as one of the team's best players on defense. (AP Photo/Barry Reeger, File) 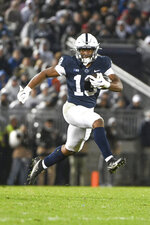 STATE COLLEGE, Pa. (AP) — Of all the teammates and opponents Penn State safety Ji’Ayir Brown has lined up with and against over the years, none has caught his eye quite like Abdul Carter.

The more Carter plays, the more Brown’s initial impression is confirmed. The rookie linebacker is something special.

“I don’t think I’ve played with anybody as good as Abdul talentwise,” Brown said. “Just raw talent and he has so much room left for growth. He’s going to be a hell of a player when he really gets into the system and works out with the team a full year.”

The 6-foot-3, 233-pound freshman has already made a big impact. For a team that’s been fueled by freshman running backs Kaytron Allen and Nick Singleton on offense, Carter is one of a handful of rookies who have emerged in Manny Diaz’s deep defense.

“There just seems to be more guys in this freshman class that have been ready to play,” Penn State coach James Franklin said. “I think that’s also a major differentiator in college football ... because you’re going to deal with it (depth). Everybody is. Your second-line players and your third-line players better be good enough to win with in the Big Ten and beyond.”

Singleton’s 10 rushing touchdowns are the most by a freshman in program history, two more than the previous mark, which Allen has tied. Combined, they’ve rushed for 1,432 yards.

Meanwhile, fellow freshman Dani Dennis-Sutton and Zane Durant have also contributed more on defense as the season’s worn on.

Carter’s ceiling? He might be the most dangerous of all. He’s second to Brown with 44 total tackles and leads Linebacker U's corps with 27 solo stops. He’s also chipped in 3 1/2 sacks, four quarterback hurries, and a team-best two forced fumbles.

That he's done all of that while wearing the program’s storied No. 11 jersey worn by LaVar Arrington, and more recently Micah Parsons, is what’s set Carter apart from other first-year players Brown has played with.

“His physicality, his speed, his ability to close the distance, it’s remarkable,” Brown said. “Being able to produce on the defense like this is definitely one of the most amazing things I’ve seen since I’ve been here.”

Carter’s presence was felt even more in Penn State’s 30-0 win against Maryland. He turned in a team-high seven tackles with starting outside linebacker Curtis Jacobs out injured.

Diaz, in his first year as the team’s defensive coordinator, has made more of an effort to get Carter on the field with Jacobs. He's had no trouble filling some of the space Jacobs usually covers. Overall, the Nittany Lions are ranked 31st in total defense and 16th in scoring defense. They’re allowing just 16 points per game as they get set to face a sluggish Rutgers team on Saturday.

In the past four games, Carter has tackled ballcarriers on average just 2.6 yards beyond the line of scrimmage. When he’s made a big stop, he’s usually popped up to shake his head and wiggle his finger as if to say, ‘No way.’

He did it on his first-ever play in the season opener at Purdue, flying into Purdue’s Tyrone Tracy with his head down. Carter was ejected for targeting. He’s kept his head up since, though his finger-wag celebration remains, and Carter’s teammates have gotten a kick out of it, especially since they describe him as a fairly quiet and humble guy off the field.

“Once we see one guy with a high motor, we’re like, ‘Let’s all match his intensity,’ ” defensive and Adisa Isaac said. “And that’s what we do. I feel like our chemistry has grown every single game this year and it’s paying a lot of dividends for us.”