Penn State's Clifford hoping the 6th season is the charm 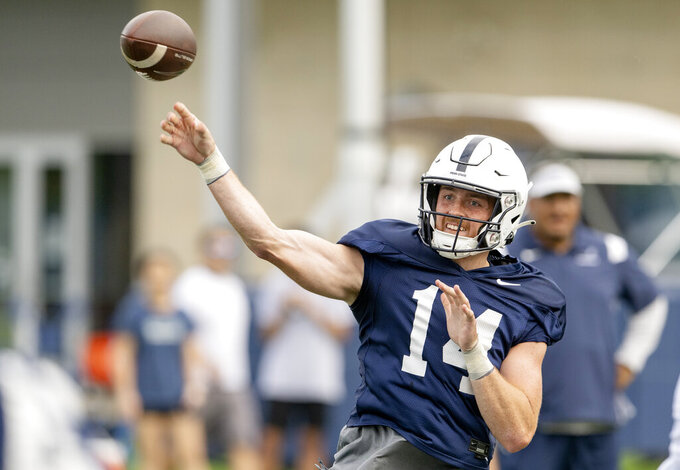 But Penn State’s quarterback came back for one reason.

The 24-year-old veteran, now in his fourth year as Penn State’s starter, is finally playing in the same offense for a second consecutive year. The extra time spent with offensive coordinator Mike Yurcich has both Yurcich and Clifford feeling more confident entering 2022.

“Play in the now and be present-minded I think is a really, really important skill to master,” Yurcich said. “And I think with all the knowledge that he has and all the experience he has, he’s been able to apply that.”

It could be what the Nittany Lions need to take a step forward after losing five of their last seven games a year ago on their way to a 7-6 mark. Last season, the defense led the way as Yurcich’s offense was bogged down by a lackluster running game and hobbled when Clifford suffered a rib injury midway through.

Penn State recruited a handful of players who will be instant additions offensively and Clifford has spent the summer “bulletproofing” himself in the weight room. Strength coach Chuck Losey designed a more personal workout plan for Clifford, one that included more yoga and agility exercises.

“Realistically it’s all about how can I move better?” Clifford said. “How can I make plays better? When my body’s put in different positions, can I adjust and make sure I’m not going to hurt myself?”

Nittany Lion running backs were rarely on the same page with offensive linemen last season, and the group’s lack of explosiveness stood out.

Penn State managed just eight runs of 20 yards or more a year ago. For a team that prides itself on explosive plays, that’s unacceptable.

“I think that also plays a role in taking some pressure off the passing game and should create some more big-play potential off of play-action pass as well,” coach James Franklin said.

Franklin has harped on the offensive line’s progress for years, so much so that he’s keeping it simple this season.

“It’s been the offensive line for a couple of years,” Franklin said. “So, again, I’m not going to sit here and pound the table about ‘this is the year,’ because that hasn’t necessarily played out in a way the last couple of years. I’m going to take a more measured approach there and let them and let us prove that to you.”

Manny Diaz is calling the shots on defense and has a strong group of linemen and defensive backs, led by tackle PJ Mustipher and safety Ji'Ayir Brown, respectively.

The biggest question for Linebacker U is who is going to play in the middle. Curtis Jacobs and Jonathan Sutherland appear to have spots on the outside leaving the middle to either Tyler Elsdon or Kobe King.

“They don’t like being labeled a question of our defense, and I understand that,” Diaz said. “They have to prove it.”

Receiver Mitchell Tinsley has been living with Clifford since transferring from Western Kentucky, where he caught 87 passes for 1,402 yards and scored 14 touchdowns last year.

He’s wearing No. 5, a number previously worn by star player turned Washington Commander Jahan Dotson. If he can make a similar impact, Tinsley knows this year will be special.

“I feel like they already had the pieces before I got here,” Tinsley said. “It’s just being at the right spot at the right time and making plays.”

Penn State opens with a night game at Purdue on Sept. 1. The Nittany Lions have won nine straight against the Boilermakers since 2005 including four at Ross-Ade Stadium. Penn State hasn’t lost in West Lafayette since 2005.

Road trips to Auburn on Sept. 17 and to Michigan on Oct. 15 are highlights of the schedule for Penn State, which is just outside the AP Top 25 preseason rankings.

Minnesota visits Beaver Stadium for the White Out on Oct. 22 with Ohio State coming to town a week later.