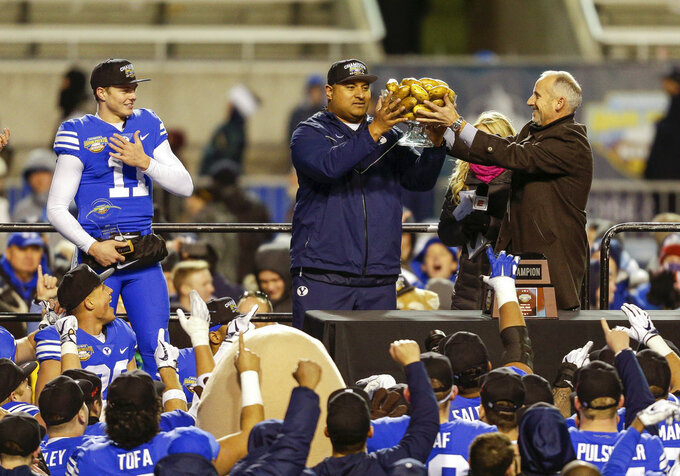 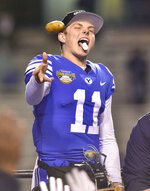 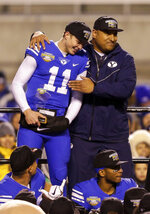 "Perfectly," Sitake said jokingly. "That's what I'm praying for, perfect play from everyone."

Sitake didn't get it from everyone, but he did from Wilson.

The BYU freshman was 18-of-18 passing for 317 yards and four touchdowns and the Cougars beat Western Michigan 49-18 on Friday.

Selected the game MVP, Wilson tied the NCAA bowl record for completion percentage set by Riley Skinner at 11 for 11 for Wake Forest in the 2008 EagleBank Bowl.

Wilson's 18 straight completions are second-most in an NCAA bowl game behind Georgia's Mike Bobo, who had 19 straight against Wisconsin in the 1998 Outback Bowl.

"I've been trying to let Zach loose for a long time now," Sitake said as he patted Wilson on the back. "I think an aggressive style of offense is what we need. This was really good for us to see that we could win a game when a team commits to stopping the run against us."

In the first half, BYU (7-6) struggled to sustain momentum offensively and had just 115 yards, despite Wilson completing all eight of his attempts, mostly on short routes. The ground game had a total of 20 yards on 17 carries.

But with BYU down 10-7 at halftime, Sitake unleashed Wilson in the second half.

The Cougars' 28-point third quarter started with an 8-yard pass from Wilson to Dylan Collie. Then, after a 37-yard TD run by Riley Burt, Wilson hit Aleva Hifo on a 70-yard scoring strike.

"I think the bar is set a little too high for the next bowl game," Wilson said. "But I think we proved what we can do as a team and found our offensive identity and discovered what we're good at."

Despite the record-setting performance, Wilson admitted afterward that he had no idea his day was going so well statistically.

"The game flashes by so quick, and I thought I had at least six or seven incompletions," Wilson said. "That's when you realize the success for a quarterback is based on the team around you."

Western Michigan (7-6), which was without starting quarterback Jon Wassink due to a foot injury, rolled up 192 yards of offense in the first half with freshman Kaleb Eleby. But the Broncos managed only 41 yards on 18 plays in the decisive third quarter.

"I thought our defense did a great job of keeping us in it," Western Michigan coach Tim Lester said. "Once they got a lead on us, they got after our secondary pretty good. We knew this game was going to be about which quarterback could get into a rhythm, we said that all week, and (Wilson) got comfortable."