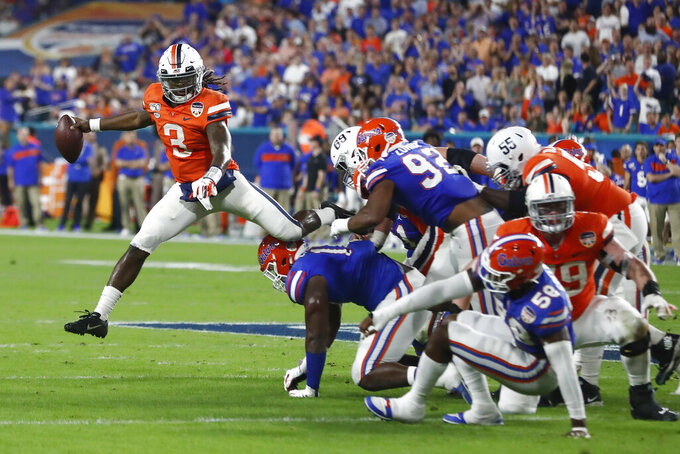 Virginia quarterback Bryce Perkins (3) breaks away from the pack to throw the ball during the first half of the Orange Bowl NCAA college football game against Florida, Monday, Dec. 30, 2019, in Miami Gardens, Fla. (AP Photo/Brynn Anderson) 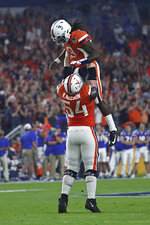 It shouldn’t be how he gets remembered.

Perkins’ college career ended Monday night, when the Cavaliers were defeated 36-28 by Florida at the Orange Bowl. His numbers were stellar, as usual — 28 of 40 passing with four touchdowns, his 323 yards through the air pushing him to 6,218 passing yards for his two seasons at the helm of Virginia’s offense.

And while that is how he walked off the field for the final time as a collegian, keep in mind all he went through to get to the Orange Bowl. How he went to Arizona State originally, didn’t play as a true freshman and then missed the subsequent year because of a broken neck that could have derailed his football career. He got his game back at a place called Arizona Western Community College, which he led to the junior college national championship game in 2017.

“I continue to be amazed and impressed by Bryce Perkins," an emotional Virginia coach Bronco Mendenhall said postgame Monday night.

His amazement is for good reason. Perkins was one of the main reasons why the Cavaliers got to the Orange Bowl, helping them rally for a 4-0 record in November after dropping three games in a four-game stretch midway through the season.

“It meant the world," Perkins said of his time at Virginia. “Not just what we did, but how we did it. Thinking about all the years coach Mendenhall has been here, and I was here for two of them, how the unbroken growth of this team and the spirit and the bond of this team is unmatched. I was happy, and I am happy, that coach came all the way out to Arizona to recruit me."

On the surface, it might not have seemed like the perfect match. Perkins was from Arizona. Virginia wasn't exactly title-contending. Mendenhall was a couple years removed from his long stint at BYU. But Mendenhall knew that he needed a big-time quarterback, and made landing Perkins a top priority.

“The prior two years before Bryce came, we were working so hard on what a culture of excellence looks like and raising hopes and establishing belief," Mendenhall said. “And it became really clear after those two years that we needed a dynamic player and person to lead our team offensively. ... Bryce is the exact person we were hopeful to have lead our program."

There’s no other way to describe him, really.

Perkins got to Virginia in January 2018. The Cavaliers have played 27 games since. He started all 27, got Virginia its first Atlantic Coast Conference Coastal Division title this season — as well as the long-awaited win over archrival Virginia Tech after 15 consecutive losses in the series.

There was no ACC title — Virginia was thumped by College Football Playoff reigning champion and current finalist Clemson — and the Orange Bowl win wasn’t to be either. But he did become Virginia’s all-time total offense leader, in just two seasons. His final pass as a collegian went for a touchdown.

And next up, he hopes, is the NFL.

After all, that’s the usual route for those in many in his family. His father Bruce played in the NFL, as did his uncle Don, and his brother Paul has appeared in 29 games over the last four seasons for the New York Giants and Detroit Lions.

“I'm getting better,” Bryce Perkins said in the days before the Orange Bowl. “I feel like I get better every year. ... I feel like my ceiling is high. I haven't reached my potential yet. And how the NFL is shifting, there's room and there's a place for my style of play.”

He’s a dual-threat quarterback, and points to Baltimore’s Lamar Jackson — the likely NFL MVP this season — as an example of how the pro game is changing.

Before Perkins arrived, Virginia had one quarterback in 128 years of football throw for 200 yards and rush for 100 in the same game — Bob Davis did it once, in 1965. Perkins did it five times in his two seasons with the Cavaliers, three times this November alone. And he points to his skill-set as something he thinks the NFL wants right now.

“It's going to give a lot of guys chances, and I feel like I fit right into that,” Perkins said.

Time will tell if he’s right. It’s already clear that, at Virginia, he was the perfect fit.