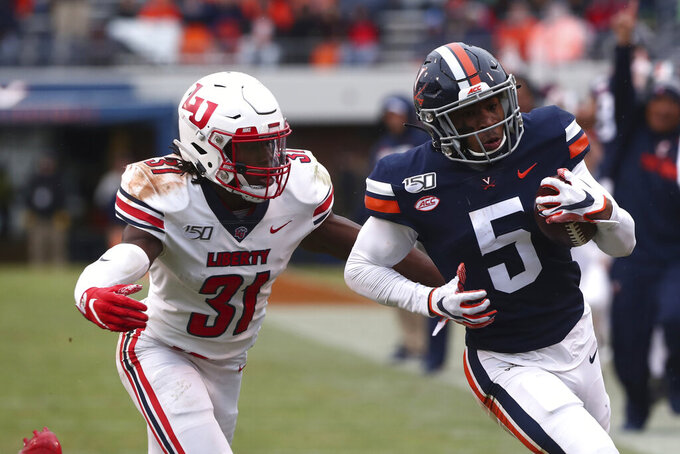 CHARLOTTESVILLE, Va. (AP) — Virginia had every reason to come out flat against Liberty, especially with a showdown looming next Friday against arch-rival and 25th-ranked Virginia Tech with a chance to win the ACC’s Coast Division championship for the first time in program history.

“The outside pressure to look past (the Liberty game), really, that’s all they heard,” Mendenhall said.

The Cavaliers came out dominant, then appeared to lapse into cruise control before a defensive play changed everything.

On first and 10 from the Virginia 38 and with Liberty ahead 14-10, Flames quarterback Stephen Calvert dropped back, faced pressure, scrambled and threw the ball deep downfield, even though there was not a player wearing the same jersey anywhere nearby.

Safety De’Vante Cross was, though, and not only intercepted, but returned it 52 yards to the Flames’ 42.

“That kind of snapped us back into it,” Mendenhall said.

Five plays later, Lamont Atkins 3-yard run gave Virginia a lead it would only build on.

First-year Liberty coach Hugh Freeze was disappointed the rest of the way.

“Up 14-10 and we just went off the rails doing things that we haven’t done,” Freeze said. “I felt like it kind of carried over into the locker room and we just never responded. ... It appears that it affected us more than I would like to admit.”

Bryce Perkins threw for two touchdowns and ran for another for the Cavaliers (8-3), who scored a season-high total.

Perkins hit Terrell Jana for 8 yards and Joe Reed for 7 and scored on a 1-yard run. Mike Hollins and PK Kier also had scoring runs for the Cavaliers, and backup quarterback Brennan Armstrong completed a 44-yard scoring pass to Dontayvion Wick with 1:58 remaining.

Calvert threw for two touchdowns for the Flames (6-5). The interception was the fourth-year starter’s first in 296 pass attempts, and Cross later got him again, again when Calvert threw deep into Cavaliers territory.

Liberty: The Flames are dangerous with the tandem of Calvert and Gandy-Golden and can qualify for a bowl game in their first year eligible next Saturday against visiting New Mexico State (1-9 coming into the day). First-year Flames coach Hugh Freeze has made a huge impact on Calvert, a gun-slinger who looks for the big play and threw 18 interceptions last year. This season, he’s thrown for 25 touchdowns with just five interceptions. Gandy-Golden had six catches for 60 yards, including a one-handed touchdown grab in the third quarter.

Virginia: The Cavaliers’ depleted secondary got a lift from sophomore Heskin Smith, who had played sparingly but was thrust back into action two weeks ago because of injuries. Late in the first half, the 5-foot-11 Smith broke up consecutive passes intended for the 6-foot-4 Gandy-Golden from the Virginia 25, forcing a 43-yard field goal try that sailed wide left, preserving Virginia’s 24-14 halftime lead.

Virginia has lost to the Hokies in the last 15 meetings, a trend Mendenhall promised to change when he arrived four years ago.

He never used the words Virginia Tech during his postgame comments , but wasn’t shying away from the importance of the game.

“The Coastal championship will be on the line and I think that reflects just growth and progress within the program,” he said.

The winner of the Coastal gets a date with No. 3 Clemson in the ACC title game.

Virginia led 24-14 when it went into field goal formation from the Flames’ 31. But it was a fake, and Armstrong hit linebacker 6-foot-7 Charles Snowden with a pass that went for 24 yards, setting the Cavaliers up at the Flames’ 7. Two plays later, Perkins hit Reed for the TD.

“It was a really nice job by Brennan Armstrong and it wasn’t an easy catch,” Mendenhall said.

Asked if the talented Snowden has a future at receiver, Mendanhall answered quickly: “No.”

The Flames finish the regular season at home against New Mexico State, which they beat 20-13 on the road in October

Virginia faces No. 25 Virginia Tech with a chance to win its first ACC Coastal Division title — and end a 15-year losing skid to the Hokies