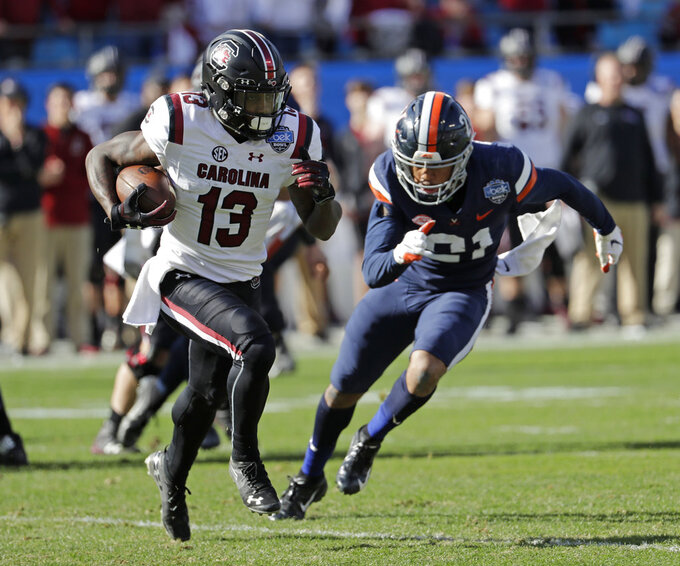 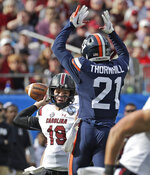 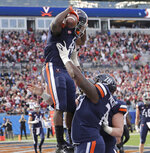 "This is the first step toward making big strides," Perkins said. "Next year we want the Coastal Division — and the ACC championship."

That would mean knocking off perennial ACC power Clemson, which has won four straight conference titles.

For now though, the Cavaliers (8-5) will have to settle for savoring a 28-0 victory over South Carolina in the Belk Bowl, a win that snapped the longest bowl drought in the ACC.

Perkins completed 22 of 31 passes for 208 yards and ran for 81 yards. Zaccheaus had 12 catches for 100 yards and Jordan Ellis ran for 106 yards and a touchdown as Virginia held more than a 24-minute edge in time of possession.

Perkins said he felt chemistry with Zaccheaus the first day he transferred in last year from Arizona Western Community College — and his favorite target agreed.

It put the clamps on quarterback Jake Bentley, who had thrown for 16 touchdowns over the previous five games, including a 510-yard, five-TD performance against Clemson earlier this month. Bentley was limited to 218 yards on 17-of-39 passing and was intercepted twice.

The Gamecocks clearly weren't the same playing without wide receiver Deebo Samuel, who bypassed the bowl game to begin preparing for the NFL draft.

Coach Will Muschamp said he was "disappointed" in the team's performance, adding "we didn't put on a good show and that's on me."

Bentley said he didn't play well at all.

"The interceptions especially and then not executing in the red zone is a tough thing to swallow," said Bentley, who added that he hasn't made a decision on whether he'll enter the NFL draft.

The Gamecocks were shut out for the first time since 2006, when they lost 18-0 to Georgia.

"That is huge," Virginia safety Joey Blount said. "I don't know of many teams that have done that in a bowl. That just shows our defense is for real."

South Carolina: The first game of the post-Samuel era did not go well. That could be a troubling sign for next season for the Gamecocks, who had come into the game as five-point favorites. It would be a little surprising if Bentley turns pro, particularly after such a poor performance.

Virginia: Bronco Mendenhall's defense limited what the Gamecocks could muster on offense with a series of blitzes and strong coverage in the secondary. Most of that unit will return next season.

South Carolina coach Will Muschamp said he felt Perkins should have been the game's MVP because of his ability to "keep plays alive with his feet on third downs" time and time again.

Ellis said having Perkins on the field is like playing a video game.

"You think he's going to get sacked and he ends up getting out it and running for 10 or 15 yards and getting a first down," Ellis said. "It's just crazy to watch him play. He gets out of trouble and can throw the ball down the field. It's just hard to stop him. He's going to be even better next year."

Virginia defensive back Bryce Hall announced he is returning for his senior season after contemplating entering the NFL draft. Hall leads the nation with 20 pass breakups during the regular season. That should bolster a secondary that is returning most of its players other than Tim Harris.

South Carolina: The Gamecocks return to this stadium on Aug. 31, 2019 to face border state rival North Carolina in a neutral site game. This was South Carolina's first loss in Bank of America Stadium. The Gamecocks have won regular-season games in 2011, 2015 and 2017.

Virginia: Has a bright future next year with Perkins returning at quarterback. The Cavaliers are back in action on Sept. 7, 2019 when they host William & Mary.